The emergence of the LG-D820 at the FCC proved pretty exciting for Nexus fans hungry for any news about the next upcoming phone. But a tweet from @EVleaks not long after proceeded to sink that for a number of people, with the serial leaker proclaiming that it was just a CDMA variant of the LG G2.

At the time I wasn’t convinced as the dimensions on the D820 vs the LG G2 were not a match meaning that it was more likely a Nexus than a G2 variant.

The inclusion of Qi charging in the FCC filing for the D820 meant again that the phone was more likely a Nexus than a variant of the LG G2 as the only LG G2 getting Qi charging is a Verizon version and the D820 did not contain any LTE bands for Verizon.

Supplementaly, Google+ user Guus Janssen actually went ahead and overlaid the picture of the backplate from the FCC filing over the possible new Nexus phone in the Kit Kat raising statue video – apologies for the badly done gif : 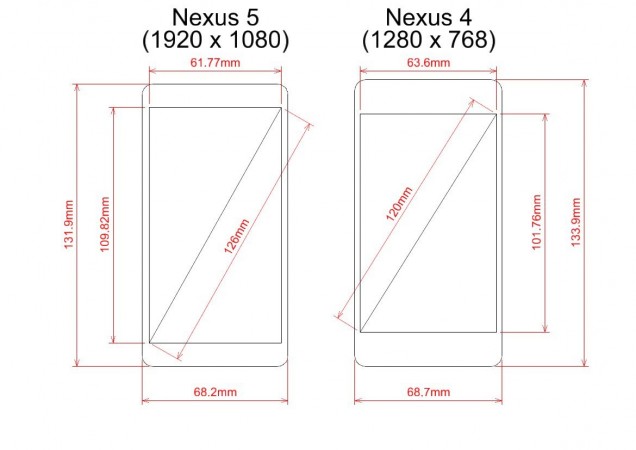 Now, that said, I actually agree with @EVleaks on the D821 not being a Nexus phone, but that was based on the dimensions for the D821 which actually don’t match up with the D820 and actually fit more inline with the LG G2 :

Now, overnight the D821 actually went through the FCC and while most of the information is sealed away, it did show that the LG D820 carries GSM bands, not just CDMA and also carries Band 5 and Band 7 LTE, again not much use to us in Australia. But either way, not a Nexus but not ‘just a CDMA G2 variant’ either.

So, last night, @EVleaks came out and said it :

As I said, I actually believe that the D821 could be a variant of the LG G2 based on the size alone, but we are also then looking for a model # similar to the D820 with Australian LTE bands. The specs on the D820 which do match up with the LG G2 look amazing so even though nothing is certain and it’s entirely possible – although unlikely – that this is just an un-announced LG phone, either way it’s now officially Nexus phone rumour season and I can’t wait to see more.

If Nexus is made by LG, would be a disaster for all Android fans

Honestly I said the same thing until I bought my Nexus 4; it’s a superb phone. You could argue that the credit could be given to the Chipset and not to LG, after all construction isn’t the best, but I they’ve earned the right to call themselves a worthy Nexus manufacturer.
I’d LOVE to see Sony make a Nexus with a kick-arse camera in it… THAT would be awesome!

Exactly, the “disaster” response is coming from someone who has not used one.
Apart from the stupid back glass I love my Nexus 4 and it absolutely craps all over Samsung.

because you never used good phones

It wont happen. Cameras and such are where they skimp to make it for the price that it is. Its more an enthusiast phone and they are generally spec whores on a data sheet so it makes them happy.

It might be for you. However, you don’t speak for ‘all Android fans’ and you’ve made no attempt to justify such a stance.

Are you? The Nexus 4 isn’t a bad phone. Only thing that’s a downfall is the battery life.

Just got mine last week, the battery life on it is horrendous! reminds me of my DHD days :/

That said, I simply love it! just hope the next Nexus phone improves significantly on battery life!

According to those dimension the Nexus 4 is actually bigger than the Nexus 5?

Yes, the actual complete phone will be smaller than the nexus 4, but with a larger screen.

Don’t rely on the nexus 4 screen dimensions. i didn’t put as much effort into accuracy there – the resolution doesn’t include the navbar, so the actual screen dimensions would be slightly longer and narrower, diagonal distance staying the same.

Trying not to get excited by this. I was getting worried that the dimensions would be too big for me. A Nexus 4(2013) sound a lot better than a nexus 5.

You left out two really important pieces of information that heavily hint that this is a Nexus phone. 1st, the OS running on the device as reported by AndroidPolice was Android 4.4, KitKat. No other phone but a Nexus would be running that OS version yet. Second, in the device description it used the term ‘hammerhead’ and it has been rumored for the past year that the code name for the next Nexus phone was hammerhead which makes sense because the code name for the Nexus 4 was ‘Mako’, another type of shark just like hammerhead. You can read more… Read more »

I think you’re right…. and that photo in the KitKat video is definitely of an LG. Bit disappointed as I really want a Motorola Nexus phone.. I dislike LG after the botched release of the Nexus 4.. still hanging onto my Galaxy Nexus waiting for a reason to upgrade.

A stuff up in supply lines (which is about people not product) is no reason not to like LG, they made a good phone and at the price you can’t complain.

Also, I’m not sure there’s much evidence that LG did stuff up. They claim that Google just didn’t order enough devices and Google didn’t deny it as far as I’m aware. The fact that there was also stock problems with the Nexus 10 from Samsung (who are normally quite reliable) supports LG’s version of events.

the issue with the release turned out to be Google’s fault. They based how many they would needon how many of the Gnex they sold- buggerall. I doubt this will happen again. I think they now see that when someone offers a phone this good for this cheap and this easy to buy people are going to jump all over it..

Give LG a chance – I’ve been surprised how good they are, and when I upgraded I bought LG again. Granted this was in the pre-android days, but you know the software will be good, and their hardware has that quality hand-feel to it even in the mid-range.

So now it’s OK to defend LG for Google’s botched release of the N4. Last time I did that on Ausdroid I got down voted so hard and even the author of the article bagged LG and defended Google.

Good to see that as times passed the Android fanbois are realising where the real fault was. Hopefully @OzJason will see it some time too.

There could be two Nexus phones…a Nexus 4 by Motorola and Nexus 5 by LG. Nexus5Forum dot com

I think the only thing that LG stuffed up was the USB OTG. The supply and delivery of the phone was googles fault.