Since the days of the T-Mobile G1 (HTC Dream) Cyanogenmod has been ported to nearly every Android phone released, and over the last couple of years they’ve grown even larger, with Cyanogen Mod now available on over 150 devices in its various forms. But as an un-official community developed ROM it’s been reliant at times on donations from users, but today Steve Kondik (Cyanogen) has announced that that is about to change.

Steve Kondik has announced via the Cyanogenmod blog that Cyanogenmod is now an incorporated company that has raised $7 million from Benchmark Capital and Redpoint Ventures and plans to:

* Organize, lead, and support our community
* Create amazing user experience centered around how YOU work
* Security solutions that really work
* Stay committed to building the features our users need
* No junk
* Constant updates
* Available on everything, to everyone

They have opened up a website at http://cyngn.com/ where you can meet the team.  While they have some big money backing them it’s good to see they haven’t lost their sense of humour and fun in their bio’s on the homepage. 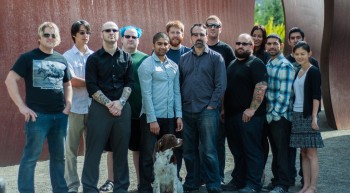 First step in the process for the team is to make the installation of their ROM easier than the current ‘hideous installation process‘.  They plan on releasing to the Play store in the next few weeks a CyanogenMod installer to streamline the process for users.  How they will get this run ‘on everything’ is still to be seen with many phones having locked bootloaders and closed source hardware.  Koushik Dutta went part of the way to answering this today:

Currently the installer supports unlockable devices and devices that come unlocked out of the box (ie, most Samsungs via Download Mode).

We’re still deciding how to handle locked devices. There’s legislation (DMCA clause) in the US that allows the user to bypass copy protection to essentially root their phone. We could do it, it’s not hard, but we have to make sure that this won’t get us into any hot water later.

While Steve has said ‘Our community is our biggest asset. With any change in structure like this, questions about motives and reason are going to need answered. The new products we have created should give you an idea about our motivation, and where we are going.’ the end game is still unclear.

Next up they need hardware, with an announcement apparently coming”in the next few weeks“. Here is where I speculate.  I personally cannot see any of the big name manufacturers jumping on-board but for an up and coming manufacturer it would be a great opportunity to get their name out there and ingratiate themselves with the Android community.  So that, in my mind, rules out Samsung (although Steve Kondik did work for them previously), HTC, and LG.  Then we need to think about those manufacturers that have actually worked with the developer community and welcome the open nature of Android with open arms.  Two companies spring to mind when thinking about this, Sony and Oppo.  I think Sony is far too big to be involved in something like this little startup so my money is leaning towards Oppo who have openly worked with the CM team to get CM working on the Oppo Find 5 in the past.  Whichever manufacturer gets onboard I see this as a very exciting prospect which could change the face of Android. There are still many lingering questions including: How will they monetise the company?  Through hardware alone?  Will they get the tick of approval from Google themselves, as is required to ship a device/ROM with the Google closed source apps (eg. Gmail, Maps etc)?  Koushik Dutta, a member of the team answered this by saying:

We’re in an interesting spot, because typically GSF is licensed to OEMs, not software vendors (us). But becoming a legitimate business entity and partnering with an OEM are the first steps to licensing GSF. Most of the technical hurdles have already been overcome (passing CTS).

Tom Moss, who is on our board, is the ex-head of Business Developments and Partnerships at Google. He basically drafted all the agreements to license GSF, anti fragmentation clauses, etc. He’ll be very helpful as well on this front moving forward.

In an interview with Engadget a company representative said that they hope to become  “the third major platform in the smartphone market” which is a confusing statement in itself.  Do they mean to fork Android and branch out themselves into a separate OS?  Will they still be based on the AOSP?  They have stated that “they are an ally to Google, not a competitor” although later by Steve was more ambiguous:

There are no plans to close the source for things such as device support and work done in the community. We do need to build value for the company, and there are various things we are working on that require significant time and capital to develop- these may be proprietary but we won’t pervert/close the core OS for this to happen”

Our strength is that we have a strong open source community behind us.  The core of the project (hardware support, community contributions, etc) will always remain open source. But obviously, as a company that has financial needs, employees to pay, Cooper treats to buy, and Cyanogen-babies to feed, we will need to make careful decisions about what we open source, and what may become proprietary.

But then he also said that

We want to improve our relationship with Google, for sure. We’re still a bit outside their model, but I believe that what we are doing is still in their best interests. One of our advisers and board members is Tom Moss, who led the development of the Android partner program for Google under Andy. His insight has been incredibly valuable.

So many questions, very few answers at this stage.  Everyone was wondering what Steve/Cyanogen was doing after he left Samsung. Now we know.  This  certainly seems to be an exciting development in the Android development community space.  I would imagine with so many questions still unanswered we will be seeing updates and speculation over this every day.  I personally am eagerly anticipating and looking forward to the hardware announcement next week.   Anyone else interested in a Cyanogenmod phone (well, technically they are only a software company so it will be for example, an Oppo phone running CyanogenMod)? I wonder if it’s bootloader will be unlocked and I’ll be able to put AOKP on it?

Maybe Nokia will get on board ;-P

Crystal ball says their OEM partner/backers will be the big chinese companies like Oppo, Meizu and Xiaomi for world domination.