Home Mobiles Nokia Android handset still in development at least until November at this... After a previous post in which we reported that Nokia was working on an Android based Lumia device, C Tech, a Chinese based website, are reporting that Nokia is in fact still working on such a device until November, which is when the Nokia/Microsoft merger could earliest occur.

C Tech are reporting that the device is being made in partnership with Foxconn, who also make Apple’s current iPhone range as well as other Android OEM’s, that the partnership has already made 10,000 prototypes for the said Android device prototype. 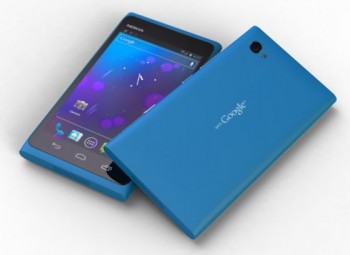 It is rumoured that the handset is not a high-end device, which is somewhat surprising, giving Nokia tend to aim for the high end market when developing such devices and that the device is packing a Qualcomm Snapdragon 200 8225Q chip. No other details about the devices specs, nor any images are not available or have been leaked so far, thought this may change in the near future – who knows!

We shall await to see if in fact the Nokia-Microsoft merger does happen and what the company may decide to do when a general meeting of stakeholders and the board are due to meet in Beijing in November.

Would you like to see a Nokia Android based Lumia device? Do you think Nokia should look at Android as a way to come back into the smartphone market if the merger of their current manufacturing area occurs with Microsoft?

Very interesting, if the big transaction between Nokia and Microsoft is not supported by the majority of shareholders, and Nokia is ready to start selling Android Lumia phones. Microsoft has to make a higher offer or to abandon the WP project. The better alternative between the two bad alternatives for Microsoft is the former. Much depends on the sales of Lumias (especially 520 and 1020) during Q3/2013.

I have always had a fondness for Nokia. Until just a couple of years ago, all I had ever used were Nokia phones, and they had never failed me, consistently providing a reliable and user friendly experience. I only moved away from the Nokia brand because I wanted a smartphone, and of all the smartphone OS’s, Android was my favorite. I’m currently using an LG Nexus 4, and was planning on purchasing the Nexus 6, but if a potential Nokia/Android offering is compelling enough, I WILL definitely consider switching back to a Nokia handset.

If Nokia was running Android they could tell Microsoft to go jump. I believe there’s millions of people that would lay down cash for a Nokia 1020esque Android.

I would, I only have good memories of previously owned Nokia’s. But since the day I got my shiny new HTC Desire, I could never go to another OS

I’d love to see a high end Nokia Lumia Android. I’d have no hesitation in buying one if it performed admirably.

If Nokia made android handsets they would be where samsung are now. It was a massive stuff up but i believe they have the ability to still become a major player.
Hopefully the merger fails and we see nokia start to shine.

If the buyout collapses, they’ll need a backup plan.
It makes sense to keep a few engineers working on it.

Just think about it. How cool would a Nokia made Nexus be?