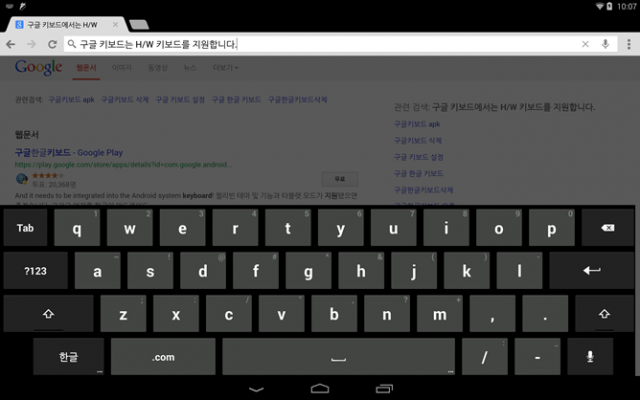 The above screenshot was taken from the Google Play listing for the Google Korean IME, the Korean Keyboard supplied by Google. While the screenshot appears to have been removed now, it does show some interesting things, one of which actually marries up with at least one suggested inclusion from a leak that could be a list of Kit Kat specs.

The feature which marries up with the list, is the grey colour scheme in the notification panel which we heard about in the leak which suggested that users will be able to change the default blue colour scheme to other preset palette colours; a feature we actually first saw when a Googler apparently left the upcoming Nexus 5 unattended in a bar.

The other thing to note is the debug icon – a pie – suggests that internally at least, the ‘Ḱ’ release of Android is still being referred to as Key Lime Pie. Android Police have added a comparison shot of the two screenshots as seen below which shows off both the colour palette change as well as the icon.

With an October release – the norm for the last two Nexus Phone releases – being suggested in rumour and leaks, we won’t have long to wait to see exactly what is in Android 4.4 as well as seeing what the new Nexus phone will look like.

The suspense is killing me.