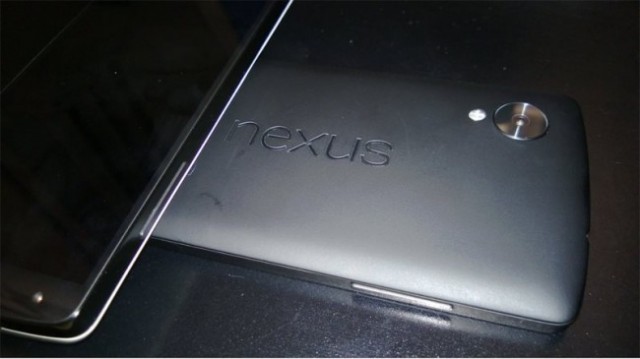 As we progress closer and closer to an expected launch of the Nexus 5 as well as the Android 4.4 update, it seems the Nexus 5 just won’t stay under wraps, with this latest picture of the phone coming from the MacRumours forum.

The picture which has a very washed out look due to the close proximity of the flash to the device is looking very grey in terms of colour although the poster – weespeed – described it as black. The description given of the device :

Got to handle the Nexus 5. It is smaller than the G2.
Didn’t actually measure it, but holding it in the hand it is smaller.
It does feel good holding it. The black back cover feels like my Nexus 7.

The screen was ok, didn’t wow me like the Note 3.

The bezel is very small.

The side mounted volume rocker is there in full view, as is the overly large circle surrounding the camera lens.

Weespeed also noted that no more details could be shared due to possibly outing the identity of the owner of the phone :

I wish i could. Google is sneaky and has ways to see where the leaks come from. They are funny too. When the phone started up it needs to be updated. Some experimental software stuff and it says you need to guard it like a ninja.

Our information points to an October 14th launch but anything could happen and until Google sends out invites we won’t know for sure.

Thoughts on the back design of the Nexus 5? Is the matte material on the Nexus 7 (2013) what you want on a phone?

OK, so I’m the only one who thinks the back is made for a 5 year old to hold. With the price drop I almost bought the N4 so I could have a nice looking phone. Lack of LTE is the only thing that held me back.

I’m very glad it doesn’t have a glass back. I’ll most likely be getting this now. 🙂

I’ll also be glad if telcos pick it up and have it free on a $49 plan.

Is that the white nexus 5 on top?

Awesome, making me more tempting by the pic, However what is the phone thats on the top of nexus 5, WHAT IS IT :0

lol its another nexus 5 haha

I really wanna see where the speakers are! So far I haven’t seen anything showing them?

As long as I can FINALLY have a 32gb Nexus phone to replace my 3yr old iPhone4, I’ll be happy.

ps. I LOVE my MY13 Nexus7, so any similarities will be welcome.

It looks absolutely stunning. When I first saw the image I was surprised how grey it looks, but it makes perfect sense that it’s just a case of it being overexposed. If it shares the same design as the 2013 Nexus 7 I’ll be extremely happy!