Recently released figures from ABI Research show that Android has taken the highest-selling tablet crown from the iPad for the first time.

Don’t get too excited yet, because it’s not quite as good as it sounds. As always, being selective with numbers can make your own products look very good! The figures show a number of interesting factors that show that it’s not just price that sells Android.

Importantly, Apple is still outselling other manufacturers by volume. But when pitted against the number of tablet manufacturers using Android, Google’s OS now has the lead.

The selling price of Android tablets rose by an average of 17% from the same time last year, while iPad prices dropped by the same 17% average cost. The figures are no doubt related to the increasing number of sub-10-inch models now available on the market, which is now dominated by 7-to-8-inch models.

The 7.9-inch iPad Mini accounted for 60% of all iPad sales during the period. It’s important to note that the iPad Mini costs significantly less than its full sized companion, accounting for a large portion of the decrease in selling price for Apple.

One drawback of this research is that there is unfortunately no breakdown of the numbers on Android – due to the massive number of manufacturers that are in the Android space, gathering those numbers would prove quite the challenge. Similar issues exist when attempting to quantify smartphone sales by model.

There’ll always be space for both Android and iOS in what is now a huge market (in excess of US $12b annually), but as an Android user and fan, I’ll accept this small victory. 😉 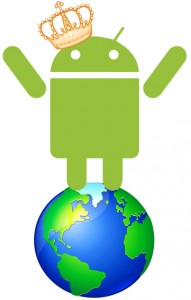 Are these numbers meaningful, or simply selectively quoted to make Android look good? Let us know your thoughts — and tablet preferences — in the comments below

It took a while for Android to gain traction in the phone market but eventually it got there. It’s only a matter of time before Android enjoys the same level of success in the tablet space. More people buying Android tablets = more developers making quality Android tablet apps = me being happy.

I have a Google Nexus 10. I don’t see the point of a 7″ tablet. I have an e-reader, and everything else is either much better on a 10 ” tablet or perfectly usable on a 4-5″ phone

I have a Google Nexus 7. I don’t see the point of a 10″ tablet. I have
a mobile phone, and everything else is either much better on a Laptop
or perfectly usable on a 7″ tablet.

I have a Sony Xperia Z Ultra. I don’t see the point of a tablet. I have a Laptop, and everything else is either much better on a 6.4″ phone or or perfectly usable on a laptop.

While yes, it would be nice to see breakdown by individual products, at the end of the day it’s the OS dominance that is important. It’s only 1-2 years ago that experts predicted iOS victory in the tablet space due to the rather slow and lacklustre entry into the segment by Android manufacturers.

The spin from this is that Android developers can no longer ignore the tablet segment. It also means that Google has more incentive to keep developing tablet features in Android.

I have no doubt that Android’s tablet market share is only going to accelerate in growth.

These ‘research’ products in the past have tended to ignore the chinese tablets, and to under count sales outside the usual suspects. As such they tend to undercount Android penetration significantly.

The last figures I saw, adding back in the cheap chinese tablets, etc. resulted in 68% share to Android tablets, and 28% to apple.

Yea and it doesn’t help either that the on screen buttons are taking up screen real estate.

Would be really cool in the future version of android if those buttons could hide on your command….

Yeah, missing the numbers that interest me the most.
What’s the Android tablet breakup?

Is it largely those awful Shenzhen beasts that you can buy on eBay for $99, but are impossible to use?
Is it mainly Samsung?
Is it mainly Nexus 7. To be honest I see more N7’s about than anything else.

Probably a lot of Nexus 7s, Galaxy Tabs and notes. And maybe sprinkle in some ASUS tablets. 😉