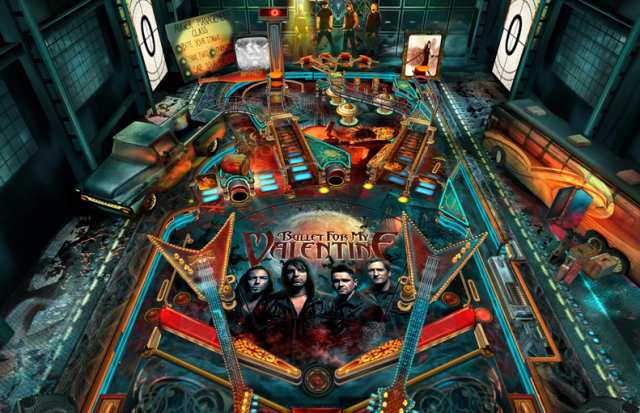 Sony Music Entertainment have opened the gates of hell and unleashed their most head-bangingly awesome game yet – Pinball Rocks HD.

As the name may suggest, this is a pinball game, but with a twist. The usual tings, dings, thwacks and buzzers of a normal pinball table have been pushed to the background, replaced with heavy rocking music by the likes of  Three Days Grace, Red, The Sword, Queensryche, The Virginmarys, Filter, Norma Jean, For Today, Anvil, Krokus, Lordi and Richie Kotzen.

This is a free game, so there has to be a catch, right? Well, you usually don’t get something for nothing, but you will be pleasantly surprised with this one!

There are five tables to play, four of them have a three minute demo mode, then it’s $3.36 per table. The great news is that the first table is totally free, and it’s probably the best one.

Playing on a Nexus 7 (2013), the graphics are rich and lush, the ball physics are spot on, the bumpers and targets bang and whirl, and the music is thumping.

On the free table you get a variety of songs from all of the bands. The four extra tables are dedicated to Alice in Chains, Bullet For My Valentine, AC/DC and Slayer. Other ways that Sony Music try to recoup some money is by offering downloads of the songs and albums from the featured bands. Some aren’t available for Australians, but the ones that are cost $12.99 for the album, or $2.19 per song.

There are also some easily dismissed full page ads every so often, but I’m more than willing to put up with this inconvenience for a great free pinball table.

If ever there was a game that demanded that you go out now and buy some Bluetooth speakers and crank them up to 11, then Pinball Rocks HD is it.

Do you like pinball games mixed with rocking great tunes? What’s your high score? Let us know in the comments below!

Wow, nice game just downloaded it on my android.

Anyone remember a couple of years ago, when Sony would install a ‘rootkit’ on your PC? I was going to download this game, then remembered that…. NOTHING is ‘free’ from Sony Entertainment.

Sounds good, but after reading the reviews on Google Play, which in the majority rate the game poorly for good reason, this is one pinball game that I won’t be getting