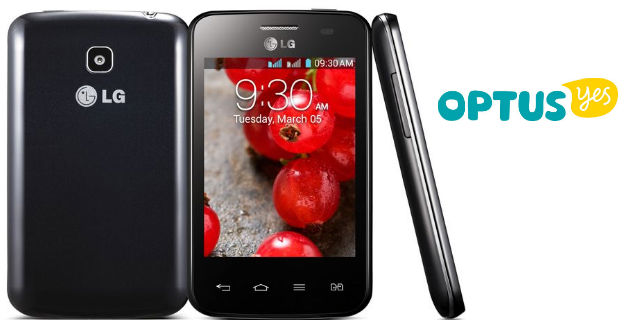 LG Australia in partnership with Optus has today advised that the LG Optimus L2 II Dual SIM will be available at retailers from today as a pre-paid device for just $99.

The introduction last year of the L Series range was a real turning point for LG, up until that point their efforts in the smartphone arena had not been stellar but the nicely priced range of well built smartphones boosted them into number two spot in Australia overall for Android handsets. They began releasing a refreshed range earlier this year launching the Optimus L series II at Mobile World Congress, and we are beginning to see them arrive in Australia.

The Optimus L2 II comes with Android 4.1 Jelly Bean with LG’s customised skin atop, the inclusion of Quick Memo is a handy application for taking notes on the go adds some well needed functionality to the handset.

Hardware wise the L2 II comes with a 3.2″ QVGA IPS Display, 1GHz CPU, 512MB RAM, 1.75GB of internal storage and a microSD card slot that supports cards up to 32GB, it can take 3.2MP photos on the rear mounted camera and comes with the usual Wi-Fi and Bluetooth wireless connectivity. A 1500 mAh battery powers the device and as noted the device comes with a dual-SIM capability.

The Optimus L2 II uses a hot key to quickly & easily switch between the dual SIM cards but one feature which potential purchasers should be aware of is that the Primary SIM slot is locked to the Optus network, but can be unlocked by paying a fee to Optus. The secondary SIM card slot – while unlocked – is also only compatible with 2G networks meaning you will receive a much slower connection.