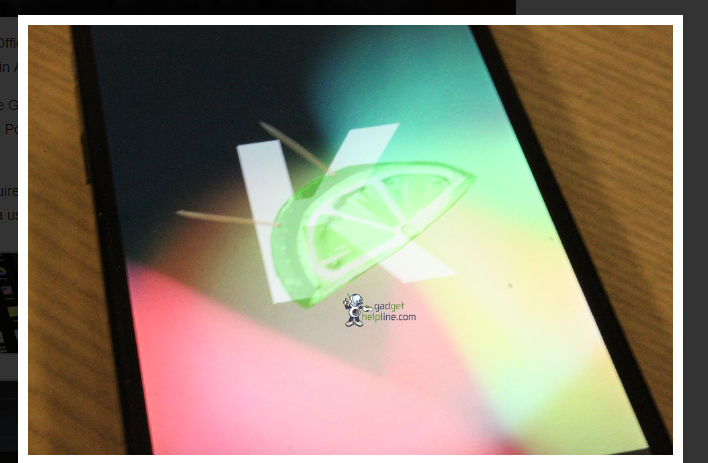 The good folk over at gadget helpline had a recent visitor in the form of a phone running Android 4.4 Key Lime Pie, now known as KitKat. This is probably an early version of 4.4 as it is loaded onto a Nexus 4, and the Easter Egg animation is a large white K followed by a slice of lime with cocktail sticks. There was a huge amount of secrecy relating to the Google deal with Nestle, even the developers weren’t aware of the name change until the last minute.

The images from the Nexus 4 can only be taken at face value, as nothing can truly be confirmed until Google announce Android 4.4 – but we’ll have a crack anyway.

This is under Regulatory Information, showing the known LG codename for the Nexus 5, Hammerhead, as well as the build number KRS65B: Next we find under System “Printing”, with options to save as PDF, printing colours, orientation of the image on the paper and number of pages: New settings in the camera app, including “Draw” under the crop setting and you can also print photos. Gadget Helpline reports that there is also Tilt-Shift, Centre Focus plus Negative and Posterize effects: A new dialer makes an appearance with subtle differences and more white space: The characters in the notification bar are white, which may be able to be changed by the user as we have previously reported, or perhaps to match the screen wallpaper: There aren’t any dramatic changes that we can see, though there are probably plenty of them under the hood. Gadget Helpline said that  Android 4.4 was faster and the user interface more polished and smoother. That’s on a Nexus 4, these attributes should be amplified on the more powerful Nexus 5.

Naturally none of the above has been confirmed as the true Android 4.4, and we won’t know for certain until Google announces it, perhaps on 14th October.

What features would you like to see in 4.4 KitKat? Let us know in the comments!

Why would there even be an article for this? KeyLimePie? We already know that it’s called Kit Kat.

I heard that the Nexus 5 will be called Nexus 4 (2013).
This looks like it may just confirm that is the case

Nexus 4 running ‘hammerheadf’? Hammerhead is devicefirmware namefor the new Nexus 5, there is no reason for it to be mentioned on the Nexus 4.

Also, Android Version shows as a name (KeyLimePie) where it should be a number.

Unless the Nexus 5 is called Nexus 4 (2013), just like the Nexus 7 naming convention