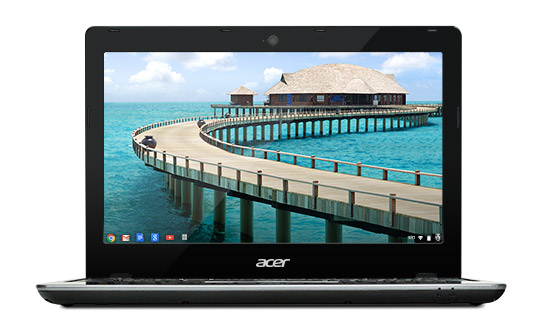 When Google announced four new Haswell based ChromeOS devices at the Intel Developer Forum last month they neglected to announce any official details such as specs, but now the US arm of Acer has announced some more details on at least one configuration of the device.

Acer has advised that the initial system given the model # C720-2800 are available to order now in the US for $249.99 from Amazon and Best Buy with ‘Additional configurations will be available in the coming weeks’.

The C720-2800 will be powered by an 1.4GHz Intel Celeron 2955U processor based on the Intel Haswell chipset, and come with up to 4GB of RAM. The C720 will have an 11.6″ screen and have a seemingly standard for Chromebooks resolution of 1366×768. The C720 will have a 16GB SSD that should make it able to offer quite a decent speed, with Acer estimating a 7 second boot time.

Physically, this newest Acer Chromebook is being described as 30 percent thinner than its predecessor with the Chromebook just 1.9cm thick and weighs in at just a shade under 1.3kg.

In terms of connectivity, the C720 has a USB 2.0 and USB 3.0 port. It also has an HDMI port for watching video or demonstrating on an external displays or HDTVs.

The C720 will also come with an SD Card reader to expand the onboard 16GB storage but there has been no mention of whether the Acer C720 will qualify for the 100GB of additional Google Drive storage for two years that previous Chromebooks have been receiving as part of their purchase price.

Acer Australia has previously confirmed that the new Haswell based Chromebook will arrive indeed arrive in Australia and we’ve contacted them again for further information in light of this latest announcement and hope to get some local pricing information soon.