Android 4.4 – Kit Kat. It was announced as the next version of Android over a month ago, but with no feature set or indication of what it would include. The single 0.1 step upgrade from Android 4.3 seemingly indicates that no major GUI overhaul will be included but what will be included is the big question and two sources today seem to shed some light on that.

As far as rumours for Android 4.4 the sources are a mix of AndroidPolice and Italian site Tuttoandroid, with both showing evidence of different location settings. With the new options seemingly setup to supply location data at three different levels, aimed at optimising battery performance : With these new location settings, you can either use one of these three or just turn the option off completely. The other new development appears to be the option to view Location History, as Artem from Android Police notes, this option could be useful in ‘debugging GPS-related battery drain issues’.

The next feature that could possibly come to Android is ‘Tap & Pay’ seemingly a new feature that could be using the NFC secure element to integrate payment systems into the OS, in attempt to thwart carriers who’ve restricted NFC based payments Apps like Google Wallet in the US, in favour of their own payment schemes, in a rush to get their fingers into the mobile payments pie. 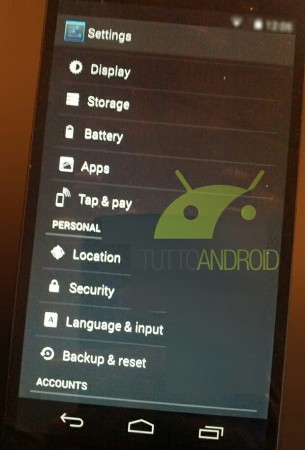 The option for Tap & Pay, while enticing to us here in Australia where NFC enabled payment terminals are prolific could still be restricted to the US, but we can always hope.

The last tidbit from the Tuttoandroid post is an impression of the Nexus 5, which their tipster apparently has either in their possession or has come in contact with, the description :

It ‘very light, which is usually something “bigger” also weighs more, but this Nexus not, and is slightly higher than the Nexus 4. The design is identical to the leak and specifications are confirmed. The rear part is rubber type.

We still hope to see Android 4.4 and the Nexus 5 this week, but with no invites being sent from Google as yet, that hope is fading, a new rumour today from CNet, speaks of developers at the Google Launchpad event speaking of an October 15th launch of the Nexus 5 and Android 4.4. The release of the new software and hardware, could come as it did last year in the form of a simple blog post announcing the products, with no corresponding event after Hurricane Sandy closed the planned launch down.

It could possibly be a good week for Android, but we’ll have to wait and see.

The local banks are going ahead with their own plans regardless. CBA is introducing PayTag which is a NFC sticker (which gets around any phone-specific security issues).

Don’t see this happening in Australia unless Google provides access to NFC chip. Has been the historical problem. We could always hope that 4.4 comes with a different implementation that is more flexible.

The settings pic for Location mode, looks fake.
If it was legit, then the status bar blurring would not have any sharp cut off.

Having tap and pay would be awesome… if the banks actually support it. I would love nothing better than to be able to just carry my phone around with me.

As for the nexus 5, come on already. I have my wallet ready and waiting to splash out the cash.