Around this time for the last 4 years Google has announced a new version of Android and along with it a new reference phone, a Nexus Phone.  The last 2 years the announcement has been in October with the Nexus phone released in November and this year it’s expected to be no different.

This year we are awaiting the announcement of Android version 4.4 KitKat and a new Nexus phone – unofficially dubbed the Nexus 5 – to go along with it. To say that the Nexus 5 is the most awaited Android phone of 2013 is a massive understatement. Ever since Google began selling and promptly sold out the Nexus 4 within minutes for a paltry $400 people have been enamoured with not only the experience that Nexus phones deliver but the bang for your buck they offer.

While we here at Ausdroid have published in the vicinity of 20 articles on the Nexus 5 and are obviously fascinated with the rumoured device, it’s not only us, a simple Google search for Nexus 5 will show you just how much has been written about this device. This is often the case about a yet-to-be-released phone, hype is built up by not only the company but by us the punters.  Time and time again though we are left disappointed.  Last year it was the lack of LTE and 32GB on the Nexus 4.  Will we be left feeling the same this year?  Let’s go over the rumours and try to separate fact from fiction and see which side of the disappointment fence we may stand in a few weeks time.

The first speculation began back at the start of May when the Korea Times reported that LG were again working on the next Nexus phone, after a visit by Google CEO Larry Page and given that they had already fostered good relationships over the Nexus 4 it didn’t seem to much of a stretch.  This rumour was then refuted, by an LG VP who stated that the Nexus 4 was a great success for them and that they didn’t need to do another Nexus phone.  Many took this as to mean they wouldn’t be manufacturing the Nexus 5 but upon further clarification it was explained to mean that they wouldn’t turn down a chance to do another Nexus device although they thought their brand was at a level where they didn’t need it to continue to be successful.  Only a few days later a Korean website claimed that LG were actually already working on the next Nexus phone, although this information was obtained with the use of Google Translate which, while good can have some mis-translations. Things then went quiet for a month or two while we all salivated over a possible Moto X coming at Google IO or soon after. 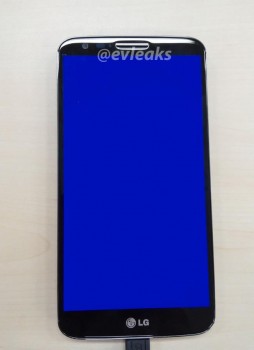 We all know that the hardware of the Nexus 4 was based on the LG Optimus G so we all paid close attention to the pictures of a supposed LG G2 leaked by EvLeaks just days after the story by the Korea Times that LG were building the Nexus 5.  It took another few weeks before we saw another leak like this but this time there was text on the screen confirming that this most likely was the G2.  Every time we saw the LG G2 mention we paid attention.  From the reported release schedule, to the hardware and software being worked on.

I use the word accidental very loosely.  How many of these leaks are truly accidental?  Companies want their upcoming products talked about, speculated upon and craved for.  Sure if we knew all the specs that’d just be a bit boring and what else would there be to write about, to build up the anticipation.  That is why tiny morsels of information are leaked here and there- to whet our appetites and leave the average consumer craving more.  The are two types of leaks in my opinion, those that show the actual device be it Mr Blurrycam or otherwise, and those that show its footprint on the web which may be website logs, appearances in benchmarking sites or screenshots of the OS on the device etc. The first glimpse we had of the Nexus 5 was via an official video Google released showing the unveiling of the giant Android shaped KitKat statue on Google’s front lawn.  At a point in the video there, front and centre for all the world to see, was a Googler capturing the moment on a mystery device which appeared to have the word Nexus emblazoned on it’s back.  I hardly think it’s an accident that Google released a video to such a wide audience so obviously showing what it did.  Google did however pull the video from YouTube once noticed but by then the cat was out of the bag, deliberately or otherwise.

Since then the Nexus 5 has appeared at various locations, everyone of them ‘accidental’ of course.  There was the seemingly now standard left in a bar episode which also happened to the Nexus 4 last year as well. Then there was it’s trip through the FCC who of course snagged a few photos, not only of the outside but also of the internals, which were then accidentally released for everyone to see.  Then there was the anonymous person who, only a week or 2 ago, got to handle one and grab a photo of it, just one of course, with the manufacturer’s name conveniently hidden. Just a little tease. 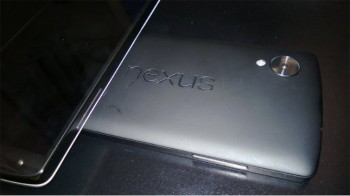 By now we have seen many photos of the back of the next Nexus phone but except for the blurry picture taken from afar at the FCC we are yet to see a reliable picture of the front.  Coincidental that we still don’t know everything about the Nexus 5?  The service manual for the LG-D821 has leaked, along with it pictures inside showing this device.  It is the Nexus 5.  In big bold letters on the back is the word Nexus. All images match up with what we have seen up until now.  Guess what though?  There is a distinct lack of an image of the front of the device in the entire document?  We can see it on an angle and sort of make out a strange looking circular ear speaker but the rest is a mystery. The Specifications and Software

So we now know what the Nexus 5 will look like but what about the specifications and software?  Of course a release wouldn’t be a true release without at least a small leak about the software it carries and the hardware it encased within.  There was no shortage of firstly screenshots and logs leaked of the Nexus 5.  There was the Snapdragon 800 packing Nexus 5 appearing on the GFXBench results.  There was the obligatory screenshot and logs from which we were able to ascertain that the Nexus 5 has a Full HD 1920×1080 resolution screen at 443ppi, it is officially called the Nexus 5, it has the now standard Nexus fare of wireless charging, it does have a Snapdragon 800 processor with an Adreno 330 GPU, it will have USB-OTG (something lacking on the Nexus 4), and it will have some form of optical image stabilisation.

Of course it still isn’t complete until we get some rumours about the software version and release date.  They arrived in the form of an anonymous tip here at Ausdroid telling a few tidbits about KitKat but also that the announcement date of the Nexus 5 is October 14 although some believe this is the technical acceptance date and the actual release date will be October 31.  A few days ago there was a leak of a screenshot of an updated Google Hangouts app showing the integration of SMS and MMS into the Hangouts app. Whether this will be ready in time for the KitKat release is unknown but it is obviously in the works. So that sounds pretty much complete doesn’t it?  What is left to show us?  The pièce de résistance, the duck’s guts, the bee’s knees, arrived last weekend in the form of a service manual.  The service manual tells us just about everything there is to know about the Nexus 5 and although it is apparently an early version, yet to be finalised, which explains the confusion about the bluetooth version. Just as this post is ready to be published the rumours and leaks keep rolling in. We had more KitKat and Nexus 5 rumours, we had the Nexus 5 hands on thoughts including thoughts on activating Google Now from the home screen and finally today the 7minute hands video posted to YouTube. By now there is so much known about KitKat and the Nexus 5. What could Google possibly have to surprise us at a launch? Is there a piece to the puzzle that we aren’t seeing? The “Ok Google” to launch Google Now was unknown. What else could possibly be left?

What we think could be coming in Android 4.4(Kit Kat)

Is that enough to get you to open your wallet?  Is this enough for you to upgrade from your current phone?  What tips it over the edge?  The specifications?  Or the fact you will always have the most bleeding edge software on your phone?  Is all this just an elaborate hoax by Google or someone else playing with us? Remember none of these leaks are officially from Google themselves.

How larger delay was there between the Nexus 4’s launch in the states and it’s arrival in Australia?

I currently have a Note 2 and love it, but am thinking of going 4G – this might be my 4G temptress… It will have to have a good stand alone price though, as I am never ever going on a contract again!

I given Google’s stance on the price of all of its products atm I would consider this to come in around the $400 to $500 mark. A lot cheaper than every other decent phone out there

I really want to know the physical dimensions of this phone, hope it’s light thin and easy to hold and type like s4 🙂

The leaked manual has the dimensions of this phone at exactly the same as the nexus 4,right down to the 10th of a millimetre, which is amazing considering its a bigger screen.