The recent announcement of new Haswell based Chromebooks from Google at the recent Intel Developer Forum saw two new entrants to the ChromeOS hardware market – Asus and Toshiba – Asus is said to be bringing a Chromebox to market while Toshiba will be entering the popular Chromebook market, but not is seems untill at least next year.

The Local arm of Toshiba has advised this morning that they are still evaluating the release of their Chromebook in the Australian market :

Toshiba is looking at the option of releasing a 13.3” Chromebook in 2014, but nothing is confirmed at this stage.

At least we know that the screen size will be a little more about the specs on their device, 13.3″ screen with a Haswell processor and the graphic from Google in their original announcement post also gave us a view of what the Chromebook will look like : 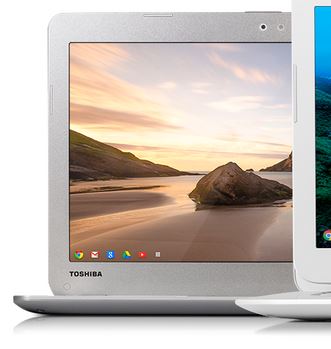 Still very much interested in what Toshiba can do in the Chromebook space, their Portégé range of devices are some truly wonderful pieces of engineering and the quality of manufacturing on their day to day laptops is also of a very high quality. Stay tuned, as soon as we have any further information, you’ll hear it here first.

Can we have a decent screen resolution please. In this day and age anything less than 1920 x 1080 is a joke. The Pixel did it right – just sucks it was too expensive