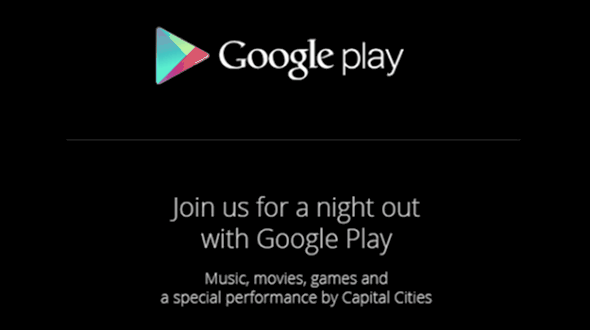 This is most likely it, Google has begun sending out invites to press for a Google Play event in New York City to start at 7pm on October 24th, but like everything about this lead up to the release of Kit Kat, the Nexus 5(and maybe 10) nothing is certain.

The event which is being billed as a Google Play event which is inviting attendees to join Google ‘for a night out with Google Play’ where there will be ‘Music, Movies, games and a special performance by Captial Cities’.

Geek.com has been advised that this may actually just be a Google Play event with no new hardware announced at the event, but given that we saw the Nexus 5 appear, albeit briefly on Google Play yesterday afternoon ready to go, it would be almost counter-intuitive to hold an event relating to Google Play which is so closely tied to Android without announcing any Android related news.

The event, will most likely be streamed through YouTube as most Google events are, in Australia we’re lucky with this event, as it’s scheduled to take place at 10:00am AEDT on October 25th which is a decidedly more human hour than the usual 2am events we’re used to. Join us for all the details here when the event takes place.

Update: More reports coming in that this is not the event we’re looking for, no hardware seems to be the common theme to the ‘tips’ appearing now.

Update: The event has been completely debunked by Russell Holly the writer from Geek.com on Google+, to the point where the original article on Geek.com has been removed. As you were Android Fans.

Will we see new Nexus devices at the event? What about Android 4.4?

arggh… the wait is killing me. If this was Google tactic I think it is going to work, by the 24th I think people would be willing to enter their credit card details for anything called a ‘nexus 5’, even if it was described as a pink plush elephant that sings you a lullaby.

will they have a “week” long set of events??
Starting with this Google Play event, bands etc… something on the Saturday and then the main event on the 28th.

Just their way of puling attention away from Apple and Nokias events earlier on in the week.