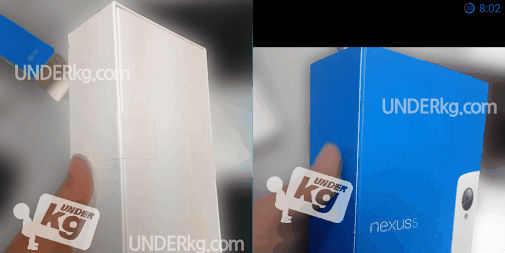 The Nexus 5 has pretty much been seen from every angle now, we pretty definitely know what’s inside it, and how much it will be, but what will it be delivered in? Well, that question looks to have been answered in these pictures originally from UnderKG but re-shared on Google+.

The packaging shows blue themed packaging that is similar to that of the box that the Nexus 7(2013) came delivered in. Last years Nexus devices came in grey coloured boxes, but this year it appears that blue is in. 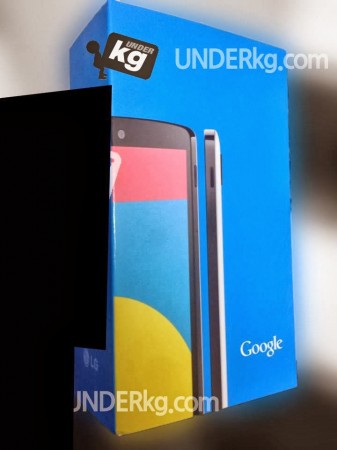 The box shows a white variant of the Nexus 5 in a two-tone with a black front and white back, in what we’ve taken to calling the Panda Nexus colour variant which is how the previous iterations of the so-called ‘White Nexus’ devices have been released, at least for the last three models.

Up till now, Nexus devices have been released in a single colour variant, black for the most part with a white variant generally showing up at a later date in restricted quantities. With this leak of packaging this early showing a white variant, it seems that Google might actually be gearing up to release the white variant at the same time as the black.

If given a choice would you go for a white or black variant of the Nexus 5?

Jesus Christ, probably the the worst-kept secret in tech history from KitKat statue video to this. Is there anything left we don’t know about this phone?

Only thing left to be revealed is when I can actually throw my money at it!!

Still don’t know whether the 32gb model has that bigger battery and whether the smaller 2300 or 2400mAh battery will give better battery life than N4.

The 3000 mAh battery has been debunked. Every SKU of this phone has the same physical dimensions and there was a recent teardown which confirmed that there’s not enough free space in the chassis to accommodate a physically larger battery.

Haven`t seen Ausdroid mention either. Either way given the Nexus 4 I assume it would be inadequate for my means. Need battery life benchmarks to determine whether or not this is a P.O.S. like the N4!

We decided to ignore the pretty much unfounded rumour of different sized batteries based on storage capactiy, instead concentrating on the more solid information in the Service Manual leak which specified a 2,300mAh battery – http://ausdroid.net/2013/10/06/nexus-5-32gb-details-and-photos-from-a-claimed-service-manual/

As to whether the Nexus 4 is a P.O.S, well, that’s a personal opinion.

You are 100% right that P.O.S. determination is entiterly personal. The fact that I have a 2 & 1/2 year old SGS2 with official Samsung 2000mAh battery that gets better battery life than the Nexus 4 is an utter disgrace for Google. Unless they can improve on the battery life of the N4 I see no reason to upgrade my phone.

P.S. I purchased a 32gb N7 at dick smith today but fail to see the value in a new N5 if it doesn’t offer more than a days battery life for most users.

You’re 100% right whether or not the inadequate imo battery life on the N4 makes it a POS is an entirely personal opinion. Given that my official Samsung 2000mAh battery for my SGS2 that is 18 months old gives me better battery life than an N4 according to reviews is an utter disgrace for Google. I wish Google and other phone manufacturers would give more importance to what I consider an acceptable battery life. I can’t be the only user dissapointed with current phones inadequate battery life. The more I hear about the N5 I believe it will only have… Read more »

“gives me better battery life than an N4 according to reviews is an utter disgrace for Google.” Is your assessment of the N4 battery just from reviews, or from personal experience? I switched tothe N4 from the HTC One X, and the N4 had vastly better bettery life. It lasts a good 36+ hours on average use for me, and has done for the last 12 months. I have never had a SGS2 however so can’t compare to that.

Two replies of mine have been removed while remaining completely civil. I was trying to inform you how I came to my conclusions. Don’t know why I bother given your site’s history of censoring comments.

We don’t censor your comments(unless you’re being rude) Disqus is generally the culprit when comments go missing.

As to whether you’re right with regards to your view,on the Nexus 4’s battery how long did you use your Nexus 4 to come to the conclusion that the device was in your words a POS?

Just saw a video review on YouTube. 22 hours since charge, 8 hours overnight while poster was sleeping, only 1h50min screen time and down to 10% battery. I’ll give it another week for more reviews and the battery to bed down but initial reports suggest the battery life is no better than the N4. IMO Google really dropped the ball by not improving a feature so heavily criticised on their previous product. I’m not disappointed at all that the N5 is sold out and I didn’t jump on the early bandwagon. Time to see how stably ROMs are running on… Read more »