I have been trialing a Sony SmartWatch 2 (SW2) for the last few days, and the first impressions are good, though a more in-depth review shall be coming soon.

The SmartWatch 2 is a handsome device. The case is predominately matte black aluminium, which is polished around the bezel. The only physical button is on the side in the traditional watch winder position. The button itself continues Sony’s recent design theme, and is the same as the power button on the Xperia Z1 and Xperia Z Ultra.

The watch comes with a silicon wrist band in Australia, though other markets have a wider assortment of coloured bands and metal straps. It also accepts a standard 24mm band, so personalising it isn’t an issue. 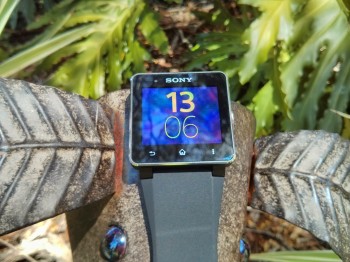 Out of the box the SW2 needs to be paired with your smart phone and apps downloaded. Pairing is via NFC, then the watch will use Bluetooth to communicate with your phone. With a Nexus 4 – or any phone that incorporates NFC – pairing is effortless, you just touch the back of the watch to the back of the phone, and it’s done.

Your phone will then prompt you to install Sony Smart Connect/Liveware manager from Google Play. Once this is done you then install the recommended apps that you need via Smart Connect. There are Sony apps, Call Handling, Phonebook, Messaging, Gmail, Email, Facebook, Twitter, Weather, Missed Call. There are also third party apps with Augmented Smartwatch and Call Handling Pro being the standouts thus far.

The SmartWatch 2 is more of a second screen for your phone to display notifications, the watch face is always on, and when a notification comes in the watch vibrates and shows a short version of the message. Using the Sony and third party apps the watch can show a variety of messages, such as: 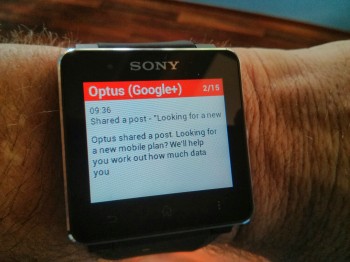 The battery life of the SW2 has been good, one charge has lasted two days of using every feature and reminder that I could find. In more moderate use the battery should last at least for three days.

Thus far, the Sony SmartWatch has many very good points mixed with some flaws. It feels as though the watch is almost finished, but not quite yet. It’s missing some imagination in the official Sony apps, with the third party apps needing to be a bit more stable.

A full review will be coming soon.

What do you think of smart watches? A passing fad or here to stay? Let us know in the comments!

Rob, I’m thinking of getting one of these for my birthday. When will you be posting a full review?

This weekend I hope. Stay tuned. I’ll update this thread when the review is posted so that you get an email.

Hi Phill, the review of the Sony SmartWatch 2 is now up!

So close to doing it Right, and Sony manages to snatch defeat from the jaws of victory. Instead of having a smartwatch that any Android phone or tabòet can use, Sony’s product is only for NFC capable devices.

Read somewhere that “You can also manually pair via Bluetooth if your handset does not have NFC.” My old non-nfc SW, once paired it is fine.

Looks like a kludge. It looks far to bulky and *flat/square*. And $355?? Not a hope. Happily keep fishing my Note 2 out of my pocket thanks.

As a current user of the old SW, being water proof and standard micro usb charging are great features. May move to SW2 if no google watch before xmas.
How is the reflective LCD in bright sunlight?

I was lucky enough to receive the Sony SmartWatch 2 and the Galaxy Gear on the same day, albeit with enough time in between to have a solid play with the Sony first. Whilst I was reasonably happy to begin with, it had the feeling of the first gen smartphones (ie Motorola A1000 I think it was). It was nice, but a little sluggish. Originally I was more excited about the Sony but this changed quickly with the Gear on my wrist. The Gear was much more responsive and what I consider in line with a cohesive user experience between… Read more »

It feels and looks like old tech, plus resolution and size doesnt help. It is running old, but compared to the Galaxy Gear it is better.

Spending so much money for something that doesnt display notifications that well, limited use and issues with quality that many people are blogging and complaining about, I think it best to wait a year. Maybe HTC (cough cough) might get it right or wait for LG?

I think you are confused with the Samsung Galaxy Gear. That is 350.

Australian RRP is $354.95 on the Sony website is what I think he’s referring to http://www.sony.com.au/product/sw2

That is ridiculous. Shipping to Australia cant be $250. Just cause we live so far away, why is everything upmarketed. Even the Nexus 7.
Mobicity is probably a better option then.