Good news campers, it appears that Google are now shipping out orders for the Nexus 5 that came through early this morning. Instead of waiting till Tuesday the 5th of November as indicated for early customers, regular Ausdroid reader and tipster Chris advised that he has received his shipping confirmation for his Black 32GB Nexus 5 from Google Play : 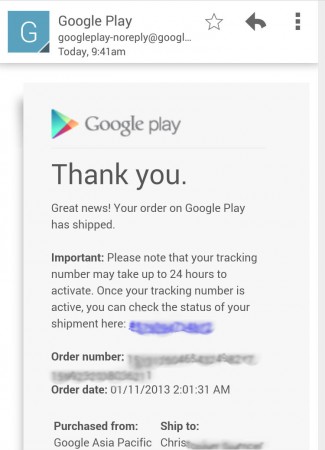 As you can see Chris was awake at 2am AWST (5am AEDT) and placed what must be one of the first orders for the Nexus 5 in Australia getting in at just 1 minute past the time when the phone went live on Google Play.

Previous hardware has shipped from Expansys in Hong Kong via Fed Ex and it appears that this trend is set to continue. With this sort of turnaround we could start seeing happy Nexus 5 owners in Australia Edit: Thought it was Thursday, looks like it will be early next week.

Have you received your shipping confirmation for your Nexus 5?

Hi, May I know how much was the shipping cost to Australia and was there additional tax charged on top of it?

Ordered the black 32gb late – around 11.30 or so AEDST on Friday. Was meant to be in the 2-3 weeks delivery group. Got an email on Sunday that it was shipped but the FedEx page hasn’t updated since then, it’s just sitting at initiated.

Still Initiated for me too for 32GB black. Called Fedex and they said they haven’t even picked up the parcel yet.

Ahh, well I guess I just got excited too early, thought I might have it in my hot little hands tomorrow.

The tracker just got updated to say it it in transit, maybe there is hope.

Ordered the 32GB Black at 7:30am, got the shipping email at 9:10pm. FedEx website has delivery as Monday.

Just got my shipping notification for a 32gb black that was ordered round 8am.

My Fedex tracking shows an estimate delivery of Monday. 16GB Black ordered at around 7:30am.

The power of Ausdroid! As I was reading this I got the update that my order has shipped from Singapore. I bought at 6am Queensland time this morning and the notification came in 7:15pm. Can’t wait!

your phones are coming from HK? mine says it’s coming from Singapore.. hmm.. placed an order for a Black 16GB at around 6:45am

Just got tracking number. Checked Google Play and has gone from pending to delivered. WTF???

Although it said 3 – 4 weeks when I placed my order this morning it now says “Has Shipped” … YAY! 🙂

they are shipping from Hong Kong via fedex

just got mine as well

Word of warning. Don’t set your delivery address as a parcel locker. I made my order at about 7am this morning and was looking all set to receive my shiny new Nexus 5 next week. However, by the afternoon I still hadn’t received my confirmation email so I checked the my orders section on Google Play and discovered my order has been cancelled without me knowing… I called Google and was informed they don’t deliver to parcel lockers, resulting in my automated order cancellation. And of course with my order cancelled I had to place a new order… and t… Read more »

I must be really unlucky.

I ordered mine at 5am Brisbane time, got the confirmation email saying it will be shipped by 5 Nov and still haven’t received my shipping confirmation yet (right now it’s 4:12 pm).

Ordered a black 32G at 5am. Received the confirmation email and the tracking number this afternoon. Expected delivery Monday at 6pm. Lucky right?
Not really!! I’m going overseas for three weeks and I have to leave by 11am Grrrrrrrrr.

awww….i’m on the same boat….hoping to get mine before i take flight 🙂

I’ll swap you 🙂 My original order was Cancelled by google, and you’re in luck that my follow-up order ships in three weeks,….

Yehia if you like, given that you live nearby, I’d be happy to sign for it and look after it for you until you get back….. 🙂

Contact FedEx with your tracking Number and ask them to leave it at the depot instead of attmempting delivery. I’ve done this on many occasions and been able to pick up my parcels at 8:30am when they opened.

Its delivery BY 6pm (I too have a estimated delivery of Monday) – so it could be delivered before you go. As Daniel says, probably worth contacting Fedex.

Ordered mine at 7:30 this morning, says it’ll be leaving the warehouse by the 8th of November.

I got mine in at 6:41am Adelaide time. Got email confirmation instantly but still no shipping. 32GB black

I ordered it at 5:10am, still shows pending. I’m assuming black n5’s are shipping before white ones.

Mine appears to be delivered from Singapore. I ordered mine at 6:30am AEDT (which is well before the start of the day in Singapore). I was hoping mine would get shipped today.

Oh thanks. Does that mean there still is a chance for it to be shipped today? Considering it is only midday there?

How will anyone on here know any more than you do ? Just cross your fingers and hope.

I got charged by Google Ireland… does this mean france is sending me a phone?

Yours will come with either a rabid leprechaun or a pint of Guiness…..;)

You got thru Ireland as that’s google’s Tax haven

Ordered my 16GB White model not long after it changed from 1-2 days, to 8th November. Oh well, still better than next February.

i need my to be shipped early, as i need it by 6th evening, so i can take it to my marriage in india 🙂

Still Pending, and I’m jumping at every GMail notification I get.

Well play store is now saying 3 to 5 weeks before shipping. looks like sold out of first batch of both 16 and 32

Ordered mine at 9am instead now. Still sitting there saying “Leaves warehouse by November 5, 2013”

Guys, it only came in at 5am. It was at 2am Western Australia time. 🙂

Oh brilliant! Having said that I just got notification my 16gb black we ordered was just shipped.
No notification for the 32gb black, and 32gb white we ordered before that though.

Now I’m really annoyed that my first order this morning was cancelled.

My order went through at 5.13am after it initally didn’t accept my credit card. Hoping I get a confirmation email soon! Would love it if FedEx delivered on a Saturday but I don’t think it’ll be that quick.

Just got my notification! It’s on its way!

What time zone you in?

Also, what did you order? Just so I can attempt to work out what the correlation is.

32GB black. I’m not really sure there is any particular order though, seems all over the place.

So just to clarify, Chris’ order went from “pending” to “shipped” in his order status?

Stoked I got mine 😉

I ordered mine at 7.10am AEDT. Hopefully I get an email soon!

“we could start seeing happy Nexus 5 owners in Australia this time tomorrow – for our Sydney based readers”
Really Daniel? You must have forgotten today is Friday Last day for deliveries for the week. and also the day we kill out brain cells with the consumption of some happy juice and other such things.

You mean the devil’s water.

You’re right, I did forget. Shift worker here, I barely know what day of the week it is.

I feel for you. Shift work is as good at killing brain cells as happy juice is.