In the first of what is likely to be many ‘unofficial’ app updates today, the Hangouts with SMS integration APK has been pulled from the Nexus 5 factory image and made available. You can download the APK from here and install directly, just make sure you have ‘Unknown Sources’ enabled in your phone settings. 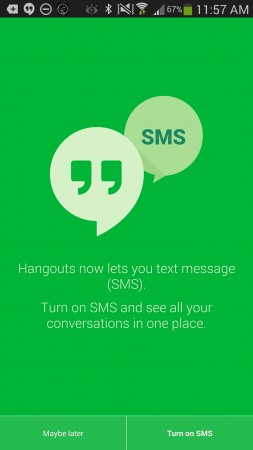 A few of us have been trying the new APK out, and while it works, and the SMS/MMS integration is definitely there, there are a few things, however, that aren’t. Video calls don’t appear to work in this build (tested between HTC One devices running GPE and Sense, amongst others), and while the SMS integration works, the option to change which app handles SMS isn’t there, because this is Android 4.4-specific, and unsurprisingly doesn’t work on Android 4.3 or lower devices.

Let us know if you’ve downloaded the new Hangouts 2.0 and tried it out, and more importantly, if you notice anything else broken!

We’d imagine that a new Hangouts will hit the Play Store soon for Android 4.3 and below devices, which will probably address these bugs. Accordingly, unless you’re fairly confident in playing with early released software, we’d recommend not installing this. If you want to install it, and roll back to an older version later, this is easy enough to do — via Settings -> Applications, select Hangouts and then “Uninstall Updates” or “Uninstall”, then you can reinstall via the Play Store as needed.

Here’s a link to the latest Play Store release just in case:

I am a rookie when it comes to android but how can we find out in hangout who is online?In Gtalk it was easy

Scroll to the top and you can then see who is online.

I downloaded it on my tablet and I can’t message people who I only have a phone number for…I thought that’s how this thing was supposed to work?

Works for me with SMS-only contacts. It feels a bit messy at the moment, especially since I have multiple gmail accounts in Hangouts and now i’ve thrown in SMS threads.

All I get for people with JUST a phone number is “Invite X to Hangouts. X is not yet on Hangouts. Would you like to tell X about it via sms?

It might be that you still need to have a cellular service i.e. a phone number. I could be wrong but I imagine it is not as integrated as iMessage. I might install on my GalaxyTab and test it out.

I thought so too.. I definitely can’t send sms from browser (gmail / g+ / hangout extension). This is the feature i wanted the most.