Google has today, finally, announced the phone that has refused to stay hidden for the last month or more. The long awaited Nexus 5 is here. The specs match up with exactly what has been leaked over and over again and was confirmed in the leaked service manual.

The Nexus 5 comes in two storage options — 16GB and 32GB — and two colours — black and white. Pricing starts at $399 for the 16GB varieties, and $449 for the 32GB varieties. The Nexus 5 is available to purchase now, with despatch from Hong Kong like last year’s Nexus 4.

Do bear in mind though that not all orders are being confirmed immediately. Some of Ausdroid’s readers have noted that they did not receive email confirmation of their orders straight away, having to wait up to half an hour for these to come.

Would be buyers are being advised of shipping from the warehouse on the 5th of November — next Tuesday — with delivery a flat $19.95 per unit to an Australian address.

There are a couple of accessories that are listed with the Nexus 5 a Bumper case and a QuickCover although neither is available as yet, they are listed as Coming Soon:

The Nexus 5 Bumper Case will cost $39.95 and will be available in four colours – Black, White, Red and Yellow.

With a hard outer shell and soft rubber lining, the premium bumper case absorbs shocks while protecting your phone. For quick convenience, the Nexus 5 Bumper Case works seamlessly with Nexus Wireless Chargers so that you can charge and go

LG QuickCover for Nexus 5 will cost $54.95 and will be available in Black and White. 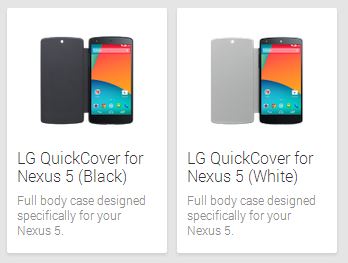 The LG QuickCover for Nexus 5 features a custom-fit unibody case and matte finish front cover for stylish protection from dents and scratches. Get access to your basic UI without swipe unlock by simply opening the front cover. For quick convenience without the bulk, the LG QuickCover for Nexus 5 works seamlessly with Nexus Wireless Chargers so that you can charge with ease. Available in both Black and White.

Google has released a quick video on the device

With devices shipping on the 5th of November (Tuesday) with a 1-2 Day turnaround, we should have our devices start arriving on Wednesday/Thursday. But stocks of the 16GB (Black) Nexus 5 are beginning to sell out in the US, so get on in while stocks last.

UPDATE: We’re now able to confirm the band support for the Nexus 5

Source: Google Play.
Thanks: Everyone who tipped us - there were A LOT of you.

Waiting to see some reviews on battery life, my Nexus 4 is great besides the battery and storage. Why upgrade when the battery is potentially worse!

Even more annoying than having to faff around with the checkout process, the order that finally did go through is now not shipping until the 8th, meaning it’ll arrive around the 12th. Rather annoyed.

I want to, but my university student budget unfortunately does not allow. Especially when I just bought the nexus 4 8 months ago

Any idea what sort of SIM card this comes with?

Nexus 4 was micro sim, so good chance this is the same. The G2 uses the micro as well.

Thanks! Now to figure out how to go from nano SIM to micro SIM…

Who are you with? Most telcos you just walk into a store and ask for a new sim card. They will swap it over on the spot.

Well that ended up being very painful. Ended up ordering 4 Nexus 5 phones. First had an ‘issue’ so I placed a second order, which also had an issue. Cancelled the first. That cancel failed. Finally got an email that the first order went through so cancelled the second, that failed. Then got an email that the second order was approved. Bugger. 2 phones ordered now. Tried to cancel the first again, failed. Then got 2 emails that both orders have been cancelled and I won’t be charged. Place another order. Declined because the money has been released yet. Transfer… Read more »

What were the ‘issues’?

Not sure, just said there was an issue processing the order and they’d let me know within 15 minutes. I placed the second order to my house instead of the office (in case it was because of mismatched address) and got the same thing.

I think it was probably just because of the load they were under, now that I think about it, but at 5am I’m just frantically trying to get a ‘confirmed’ page.

I ordered a 16GB Black and 32GB Black at 4-45am QLD time. Got an email straight away but Wallet still says pending. It has also shown on my card.

What does it say in your order history? On the summary page for me it says shipping Nov 5, but when I click into it, it says PENDING in the top right hand corner (as attached).

Same. Any idea if this is good or not? Google have charged my card – despite saying they only charge when the device ships.

They’ve charged my card, but it’s still holding in pending. The CC company is telling me they haven’t taken the money yet. So I feel better now that someone else is in the exact same spot as me!

So it will stay “pending” until it ships?

Dreading the moment in a week when my wife says “And how much did that cost?”.

Is everyone’s orders still reading as pending in Google Wallet and their order history in Google Play? Mine still is. Card has been charged but Google hasn’t taken my money. If this stuffs up, I am going to be furious!

I ordered early (6am) and my order took 1.5 hours to be processed. They are slowly rolling through their orders.

Mine was pending in wallet – no email receipt. Eventually the status in wallet went “cancelled”.

Okay – I did get an email receipt though. Seriously, why can’t they just process orders properly?

Argh – I ordered at 7:30 EST, when the dispatch time was 1-2 days. Google cancelled my order (no email notification – I noticed it in wallet).

Now they can’t ship it for another 2 weeks.

32gb Nexus 5 has a wait time of 2-3 weeks!!! Ordered mine at 6am Perth time (WST). So is this because of mass sales or do the two versions have different wait times?

Got my confirmation email and it confirms: “Ships in 2-3 weeks”. GRRR never mind it’ll be my birthday around then :). Pretty awesome gift based on all that we’ve heard about it and now know. WOOO HOOO!

Any one ordered ear phones, is that included in box? When can we expect the delivery for 16 gb exactly as there is Melbourne cup on 6th 🙁

If you go to the store where you bought it… At the bottom it tells you what comes in the box.

Just received my shipping confirmation email. I guess it pays to wake up early and get the order in. Email said 15 minutes while Google process but it took over an hour! Lets hope people dont miss out like they did last year.

Actually.. no the transaction is processed in Singapore, but the shipment via Fedex comes from Hong Kong.

Sorry about this, we’ve fixed this in the story.

The Nexus 5 doesn’t seem to have the 2100 frequency, is it going to get full reception on Optus’s network?

i also would like to have this question answered is it lte and lta or whatever it is called to run dual 4g for optus?

Answered this, but it went into ‘moderation’ and from experience it never gets out of that.

I think I figured it out on my own after more reading sorry guys.. GSM=2G, WCDMA=3G, LTE=4G. I think that’s close enough?

That’s pretty much it James, yep.

2100 is band 1 right? Do you mean their 2300 frequency which hardly any phones carry because it isn’t really LTE. Their 4G+ ? That they are trying to market as better than LTE because it’s better for their servers and not the consumer.

Just got my confirmation

Has anyone got a confirmation email after placing the order. I got the “it is taking a little longer than normal to process your order.” But nothign after that.

I processed a second order because I didn’t get a confirmation and then got one, but now it’s not letting me cancel the first one! Both orders are still processing though.

Okay, first one has finally cancelled. So all seems good! WOOO!!!

Bugger, that’s exactly what I have just done. 2 orders being processed and can’t cancel either :- the missus might soon find she has a ‘free’ new phone

Got the same message but it looks like my card has been charged. Wondering if it’s worth making a second order and cancelling this one. Been well over 15 minutes and no email has adorned my inbox 🙁

I did the same as some others, cancelled the first order and placed a second, and then received a confirmation email straight away.

Took a while too. I took the plunge and decided to wait and see what happened after placing my order. It said up to 15 minutes to process but took them over an hour. Card has been charged and shipping by Nov 5. Enjoy! Im sure a lot of us will!

Mine has been ordered, but it’s been pending for the last 30 minutes. Is this normal?

I got a “not confirmed” message at checkout and its pending now. It said I’d receive an email innl 15 minutes… But nothing! This same thing happened with the Nexus 4 last year.

Mine mine mine
Oh joy a 32gb ois nexus. Big question will a bricks and mortar retailer have one b4 mine arrives

Bought a 32 and a 16 for a mate. Still got charged for 2 deliveries. Now for another impatient wait.

Bought a 32gig one at 5am. The last few weeks have been crazy. Glad it is over.

bought 32gb white an hour before you posted the article 😛

Got mine. Decided on 32GB in Black.

I bought 2. I’m hoping it runs out in a few minutes so I could sell them in the black market at an inflated price.

Correction: My Google Play Order Receipt says “Purchased from” the Singapore office. I’m not sure if that equates to “Shipped from”.

I just got the email shipping details for fedex.

I confirm that it’s being shipped from Kwai Chung Hong Kong.

I guess purchasing is handled by Singapore.