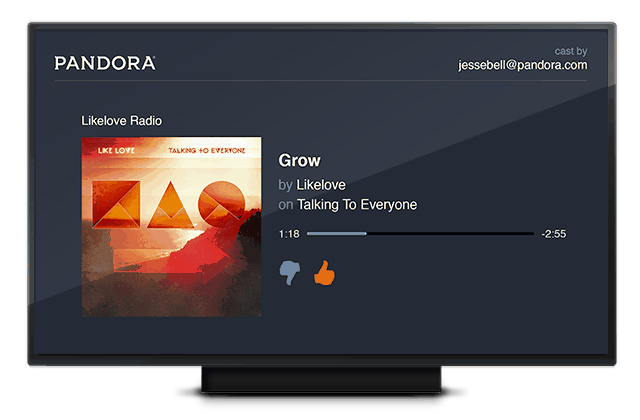 The amount of Apps that now officially support Chromecast has now grown officially by one, with Pandora announcing that the functionality is now available on both tablets and phones.

The Chromecast function was first promised for Pandora back in July when Chromecast was announced at the Breakfast with Sundar event. The Pandora blog has been updated with Tom Conrad, CTO and EVP of Product advising

Today, we’re excited to share that Pandora is now available on Chromecast, Google’s new TV-connected device that wirelessly delivers online audio and video entertainment to the biggest screen in the home.

The last update to Pandora which arrived officially on Google Play yesterday, brings along a tablet experience which Pandora describe as ‘the best Pandora yet with our new app design, now optimized just for your tablet’.

If you’re a Chromecast owner and Pandora user, this should be fairly exciting. If you don’t have a Chromecast yet and would like to acquire one without the rigmorale of going through a US shipping forwarder, Fishpond are offering a Chromecast for $56.11 including shipping to Australia.