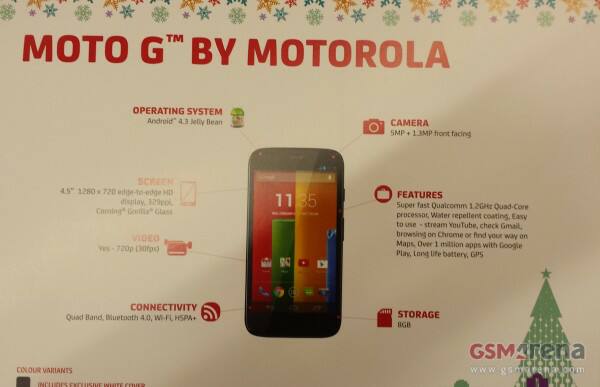 It’s still not guaranteed to be released outside of the US, but with Motorola earlier this year at the launch of the Moto X promising they had future plans for a portfolio of products that show the best of Motorola as a Google company’ with ‘exciting plans for all regions’ we sure hope we see something and the Moto G could be it.

We saw a leak of the Moto G specs via EVLeaks yesterday and today, GSMArena have supplied a picture of a brochure for the Moto G which confirms some of the specs.

The brochure lists the hardware in the Moto G as :

The major differences between the leak from EVLeaks yesterday and todays brochure is the camera 8MP vs 5MP and Screen size 4.7″ vs 4.5″, there’s also no mention on the brochure of a 16GB version.

Notably, the Moto G appears to not contain any LTE bands, sticking it squarely into the lower end of the smartphone range, despite having what appears to be a fairly decent Processor on board. This could affect carrier adoption here in Australia if indeed it’s intended for international markets, with Telstra specifically concentrating only on devices with LTE radios.

We’re now into the 13th month with no new Motorola launches in Australia and we really want to see something out of Google’s pet hardware manufacturer launch in Australia. Will it be the Moto G? Only time will tell.

Would you purchase a Moto G?