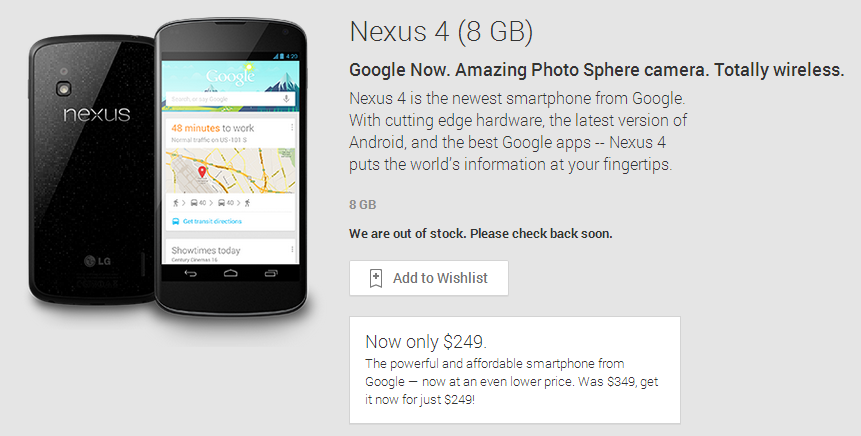 The popular Nexus 4 has recently been superseded by the Nexus 5, but the Australian Google Play store has still been selling it. That might be about to change, as the 8 GB version of the N4  is now out of stock.

The Nexus 4 was released in November of last year, where it promptly sold out within hours and it wasn’t until January of this year that it became widely stocked, and has been in hot demand ever since.

The end of the road for the Nexus 4 is nigh, with only the 16 GB available. So if you want what is still a very good phone for a very tempting price, you had better hop to it and order a 16 GB Nexus 4 for $299 before they are all gone.

Have you bought a Nexus 4 recently? Are you happy with the device for the heavily discounted price?

A guy from work was keen for one. He’s wanted one ever since they came out and when I told them they were discounted he was overjoyed! Then he asked me about the Nexus 5… Nexus 5 incoming! I’ll get mine this week though and it looks like he’s waiting 5 weeks.

Nexus 5 is completely out of inventory now as well.

My N5 32GB Black says it’s in HK still with an EDD of Monday for Western Sydney.

looks like the bulk shipment via fedex arrived after the HK cutoff time. There is a chance that it is still in HK yet so prob wont’ see them till tuesday or wednesday now, fingers crossed though the status just has not been updated and they have landed in Sydney already.

What is the estimated delivery date ? For me its Wednesday, assuming that Tuesday is a public holiday in Melbourne

I reckon that most phones will be delivered before they update the transit times.

My N5 32GB Black says it’s in HK still with an EDD of Monday (tomorrow) for Western Sydney.

Mine is Wednesday as well. I completely forgot about the public holiday when I ordered it on Friday morning, but mine missed the cutoff anyway. Disappointing thing is my weekend is Monday/Tuesday, and I’m back at work Wednesday.

If I knew where the FedEx warehouse was in Melbourne, I’d consider picking it up myself Wednesday afternoon before I head home from work. Might be easier than trying to catch them at home.

Mine will be delivered in derrimut Melbourne, u can see it via tracking no

They arrive in Derrimut depot, before being loaded onto the truck. (I’ve had 4 Nexii delivered to Melb)

Mine is saying that it is sitting in Alexandria AU, missed the hk cutoff as well. If it arrives tomorrow, i will be pretty excited as that would be incredibly fast! Now just got to wait for my screen protector to arrive (estimated 19 Nov)

But, knowing my luck…