With the launch of Australian Kickstarter projects yesterday, we’ve been looking at what is on offer and there’s already a number of projects which either have an Android App or are an Android App and the first one that caught our eye was Tapshot.

Tapshot from Game Synesthesia first came to our attention when we met the developers at the EBGames Expo last month. They were showing off Tapshot at the time but it was still a work in progress. The App is ready to leap over to a launch on Google Play(and the App Store) shortly with Game Synesthesia looking for backers to get the project over the line.

The Kickstarter project which began yesterday at the Kickstarter AU launch will run until December 12, with the current total funding goal at $10,000. So far they’ve received $605 in pledges after only one day of activity.

The premise behind Tapshot is a wild west shootout style game which sees you take on the role of ex-sheriff turned bounty hunter Louis Wesley. The arcade style game lets you blast your way through the wild west trying to bring outlaw Butch Colt to justice.

The game mechanic is simple tap on the bad guys on screen to shoot your six-shooter but remember it’s a SIX shooter and after six shots you’ll need to tap the chamber to reload. It’s when you’re reloading that the bad guys will really get you, but they’re firing all through the level trying to bring you down. Hits to different parts of the body on your enemies will increase your hit multipliers to raise your score, but they will shoot back. 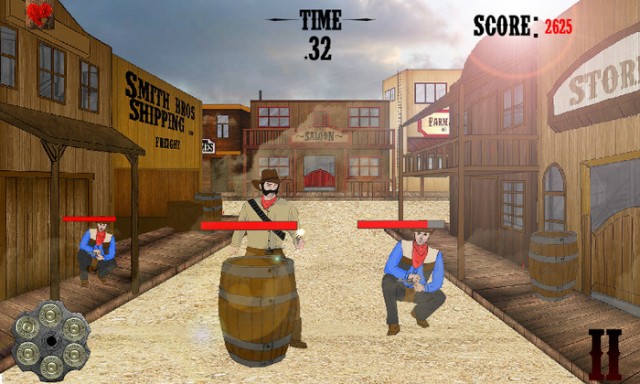 The game will launch with five levels, with another five levels to arrive after launch. Future expansion with additional levels is planned with expansion packs – presumably delivered via in-app purchase – available further down the track.

There will be an optional social element to the game, with users able to login using their Facebook or Twitter accounts – unfortunately no Google Play Games service which is a downer for me – and your leaderboards will be synced for each level to compare with your friends. If your friend bests your score you’ll get a push notification telling you just that. As part of this social implementation, challenge nights will be a weekly event, with new challenges to get really test your skills.

Kickstarter backing starts at $1 which will net you a Thank You Email, but it’s the $5 Pledge that will net you an Android or iOS version of the game. The option to have my likeness included in the game for a mere $300 is definitely tempting, but it’s the $5 Pledge that I personally have opted for. Check out the Kickstarter campaign video and see what you think, remember Aussie developers need support – forgo a cup of coffee for a day and pledge $5 to help bring this project to fruition.

Like all projects of this nature, we are here to inform not advocate backing the project. All projects on Kickstarter have no guarantee that they’ll end up being produced even if their goal is reached, so please ensure you are aware of all the terms and conditions before you back a project.