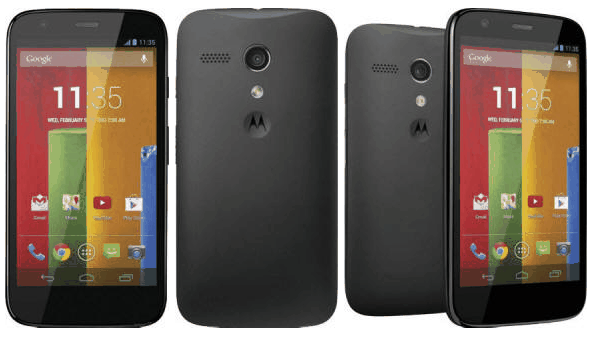 Mobicity has just announced that the Motorola Moto G is now available for pre-order from them. They expect it to be available from late November, and have priced it at $299.95 plus delivery (from $9.95) for a black  8GB version. The Moto G will have a variety of colourful back plates available, but Mobicity aren’t stocking any initially.

The Moto G was designed by Motorola to be a low cost yet powerful phone, and is priced in the States at US$ 179/8GB and US$ 199/16GB. It is expected to arrive officially  in Australia in January, though no local pricing has been announced.

The specifications for the Moto G are:

There is no expandable storage nor removeable battery – which is becoming common with phones now – and no 4G. For the price though, the Moto G seems to be a very good phone. If you are keen, Mobicity has it for pre-order here.

Are you looking forward to the Moto G? Let us know in the comments!

“There is no expandable storage nor removeable battery – which is becoming common with phones now”, only google/moto phones.

You pay the premium for getting it before everyone else. But at the starting price you should just go a N5!

The question that immediately came to my mind is why waste money paying that premium on a 3G device in a 4G environment.

Because, Jeni, 3G is still very relevant… especially here in Australia and other ‘slower’ countries.

Whether its 3G or 4G doesn’t matter. What matters is if it works or not. Perfect phone for my mum or dad. 4G would either bump the price, cut the battery life, bump the size (by expanding the battery) or a variation of all 3. And then it wouldn’t be a Moto G. It would be a letter between G and X.