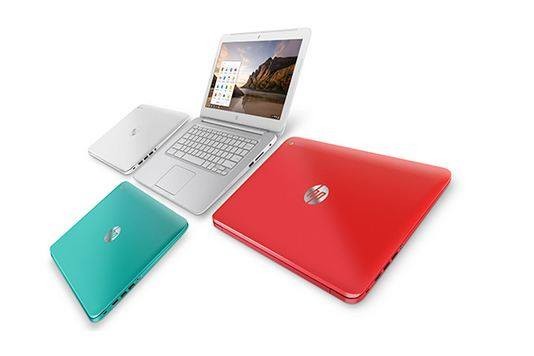 HP today unveiled the HP Chromebook 14 in Sydney, making the long awaited Chromebook available for Australians. While it has been available in the US for a few weeks it is nice to finally be included in the Chromebook release fun. The HP Chromebook 14 has, as the name suggests, a 14″ BrightView HD screen (1366×768), Intel Celeron 2955U, a dual core 1.4GHz CPU based on Haswell micro-architecture, 16GB SSD, HDMI out, and 2 USB 3.0 ports and a single USB 2.0 port. Two nice inclusions are a HD webcam as well as Bluetooth 4.0. Weighing in at 1.85kg it is not a light weight but it the 14in screen obviously does have some tradeoffs.

Not only that, the Chromebook 14 comes in a variety of colours, Snow White, Ocean Turquoise and Coral Peach – Definitely an interesting choice of colours. I’d like a silver to go with that as well I think, especially for a Chromebook priced to sell at a RRP of $499. I want it to look like a serious piece of equipment and not a toy for that price. This price is high relative to the price of other Chrombooks we have seen out here in Australia, especially when you consider it sells in the US for $299.

The Chromebook does come with 100GB of free Google Drive storage for two years. While the price doesn’t really hit the spot in my opinion maybe the general public will disagree. JB Hifi already have it on their website for $498 and it should be available through Harvey Norman stores shortly. It is nice to finally see some new Chromebooks entering Australia.

Is this the Chromebook you’ve been looking for?

Many people laughed when the Chromebook was first released. Well, they’re still around, and Google and their partners keep improving them. Chromebooks are not meant to replace laptops. They are not meant to be for every type of user. They are meant for users that spend most of their time in a browser and want a device that starts up fast and is easy to use. That’s a nice sized market. If you’re considering Chromebooks but also need access to Windows applications you can look at solutions like, Ericom AccessNow an HTML5 RDP client that enables Chromebook users to securely… Read more »

Sure, the Samsung is ARM-based rather than Intel, but how much does that really matter with a Chromebook?