The upcoming launch of Series 4 of the Dead Zebra miniature vinyl Androids is continuing to be teased, with this weekend 4 new Androids being shown off. The first one is actually pretty plain but one that I(and apparently many other people) actually predicted as far back as the launch of Series 3 – Plain Yellow: The Plain Yellow comes in a ratio of 2/16, so you’re guaranteed of getting at least two of these in every box. With the Red from Series 3, the Blue from Series 2 and of course the original Green miniature Andriod, you will of course now have the full set of Google logo coloured Androids.

Next up is an Android mini designed by Scott Tolleson, who has previously designed the Frankie Frost limited edition Android as well as figures from series two and three. The figure is named ‘2×2’ and will only feature once in every box of 16. Next up is Flipmode from Kano, an Android featuring an accessory – which we all love – a Baseball bat. The ‘Flimpode’ Android comes in a 1/16 ratio, so you won’t be able to swap this one unless you get some randoms. The stealthiest Android yet comes from designer Shawnimals and is a Ninja themed Android. The ‘Wee Ninja’ will also come in a 1/16 ratio, so if you’re after one, best of grabbing a box. 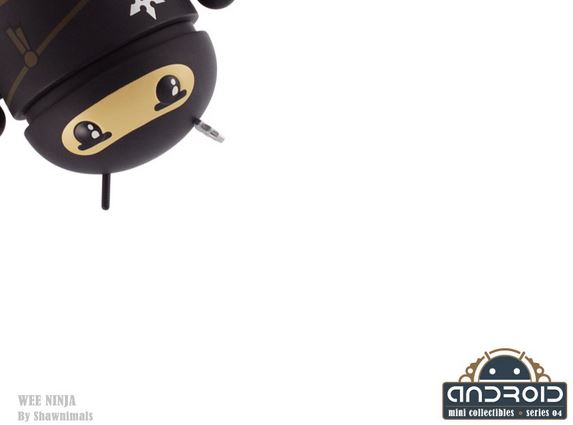 These 4 new Androids, will feature nicely in my collection and make for a fairly large order alongside the Mega Edition Green and White Androids that are due to be released before the end of the year. Thankfully, the supply of Series 4 should be not as limited as Series 1 or even Series 2, so hopefully everyone will get a shot at ordering some of these bad boys.

Are you interested in singles from Series 4 or just a full case?