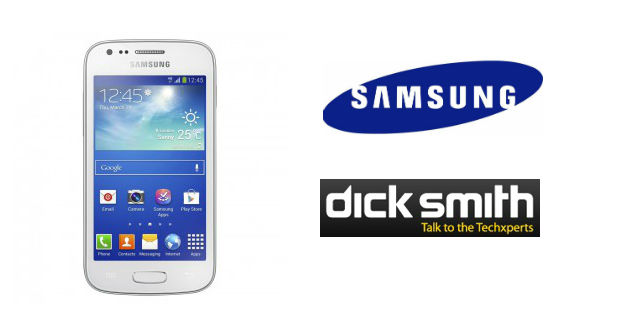 The third generation of the Samsung Galaxy Ace has now been released in Australia and is available outright from Dick Smith Electronics for $299.

In terms of specs the Galaxy Ace 3 comes with a 4″ 480×800 resolution display on the front and is powered by a 1.2GHz Dual Core Processor with 1GB of RAM. It contains 8GB of internal storage and comes with a microSD Card slot capable of taking up to 64GB cards. A 5MP camera with LED Flash adorns the rear and a VGA video conferencing camera on the front. With an 1800mAh Li-ion battery, it’s not going to last your power user all day, but should be a good device for occasional use.

The Galaxy Ace 3 is available in White only at this stage matching recent product launches in the lower end of the Samsung product catalogue, like the Galaxy Tab 3 range. The Galaxy Ace 3 was however launched initially overseas in June in black, so another version could possibly launch at a later stage, but colour variants are rarely released in the Australian market so the white will most likely be the only option.

To seal the deal, Dick Smith is offering a $30 Gift Voucher as a bonus in the latest catalogue, so if you’re interested in the Galaxy Ace 3, head onto the Dick Smith Website or head in-store to check it out.

5 paragraphs and no mention of the Android version.

I think it would be better to wait for the Moto G to be released next month. $299 doesn’t seem right for those specs.

Yeah if all you have is $300, have a look on Kogan for something that’s a little bit out of date but still more interesting than a low spec Samsung.