I reviewed the game Long Run from Australian developers 2D Tap Studios back in October, it was a fun game but the reliance on Facebook for social gaming was something I felt wasn’t really the best and they’ve now updated to add Google Play Game integration.

There’s actually a fair amount that’s been changed under the hood, the game has a more user friendly interface, which is to me is a much more intuitive one, and they’ve also done some improvements to the overall game performance. There’s even a new Takedown animation for taking out guards.

There’s been some removal of things which actually enhances the game overall, there’s no second weapon to equip anymore, instead you equip one weapon and an ability – Gun + Gravity Boots is awesome! – and the gadget cooldowns have also been removed which were a little annoying when playing the game. The game has also been reduced in size, something that may help people with a smaller amount of space on their device.

But overall, for me, the shining star of this update is the Google Play Games integration. To start their Google Play Games interaction, 2D Tap have introduced 20 achievements which will be expanded on in the future and they’ve also introduced Leaderboards so you can check your progress against the public as well as people in your circles for – Distance Run(26th), Coins Collected(14th) and Distance Run with no Revives(21st) – I’m not doing too badly.

The update is available in Google Play now, head across and update your install now, or if you haven’t download it now, it’s a really great game. 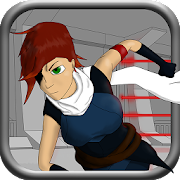