Grab your pistol and pimp your ride, you’re heading back to Los Santos, the original Los Santos. Before GTA V made Los Santos a beautifully rendered city of the stars, Los Santos was the home of Carl ‘CJ’ Johnson and his Grove Street gang and Rockstar games has just dropped the Android version into Google Play for the slightly high price of $7.49.

Before you rush out and buy it though, there’s some problems – namely : it doesn’t work. Once you download the 2.38GB worth of additional files you will, like most of the people who have left reviews you will most likely get this screen : 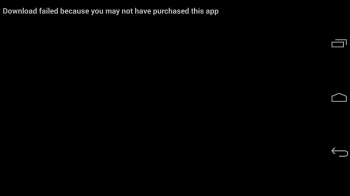 Which after downloading such a large amount of data, will surely prompt an outcry of protests from the majority of people. Still, the @RockstarGames Twitter account has yet to officially advise the title is available as yet, so perhaps it’s not quite ready for primetime. Rest assured I’ll be watching this with interest and updating as soon as it’s released.

The game has been rendered for mobile by War Drum Studios with the iconic Rockstar Games title set to feature enhanced visuals over the original release which launched on the PS2 and Original Xbox back in 2004/2005, the mobile version will include ‘high res graphics, an enriched color palette and improved character models’ as well as 70 hours of gameplay.

There will be cloud support across mobile devices so you’ll apparently be able to pick up on your tablet where you left off on your phone or vice versa, if you have the game installed in multiple places. But be warned with 2.38GB of additional downloads this game is anything but lightweight enough to install casually on any device.

For an Arcade title, Rockstar and War Drum intend to include support for MoGa Wireless Game Controllers as well as selected Bluetooth and USB gamepads, although which ones haven’t been specified,

My Slimport adapter and Ouya Bluetooth game controller are at home just waiting for me to plug in and take control of CJ and as soon as the game is ready to go I’ll be playing the absolute heck out of this game over Christmas. Head on over to Google Play to check it out.

Reading the reviews on Google Play, and it’s 2 patches on since initial relase and it’s still CTD city on game start. Not good.

Nearly left work to go home and play this…..only to find out it doesn’t work. So bummed. I really hope they patch this ASAP