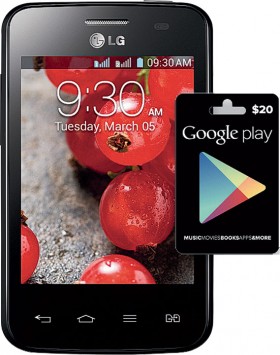 With back to school specials now beginning across the major retailers, Woolworths in the latest catalogue which starts on Wednesday 1 January 2014 (until Tuesday 7 January 2014) are offering the LG Optimus L2 series II on Optus Pre-paid for $99 with a bonus $20 Google Play Store gift card.

LG certainly have come a long way with the L Series and even though the Optimus L2 Series II does offer a very basic set of specifications with a relatively small screen, I have to say its still a good device for a first time Android user.

Just in case you have forgotten what the L2 Series II specs are, here is a rundown for you:

Just to add to the specs above, LG announced only a few days ago or late last year to be technically correct, that the L Series II devices will be getting the new “Knock On” feature.

You can check out the LG L2 Series II at your local Woolworths Store or online in the latest catalogue.

Apart from the amount of on board user storage, and Android version, the specs of the L2 II dual, read like an low to mid entry level Android device, from 4 years ago.