Pebble Steel answers a major criticism of the original Pebble — that its plastic shell and rounded edges made it look like a toy — and comes in two colour variations, Brushed Stainless and Black Matte. It’s got Corning Gorilla Glass on the front with an oleophobic coating, there’s an RGB LED hidden away indicate charge status. Impressively, even with the new metallic body the Steel retains the original Pebble’s “5 ATM” waterproof rating (explained here), so it should hold up to about 40 metres underwater. 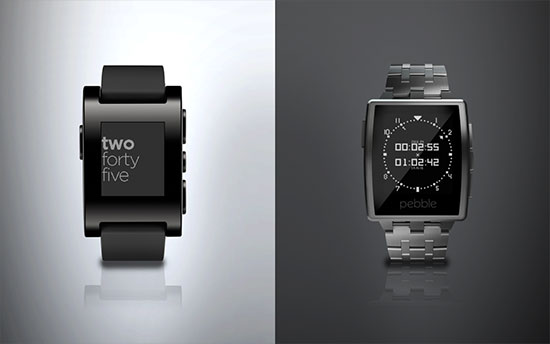 Pebble’s kicking their price up by $100 for the Steel, to US $249 – a premium price for a premium product and not terribly surprising given the pricing strategies of their peers in the smartwatch arena. For the price you’ll get the Pebble Steel in the colour of your choice and two wristbands – one metal, one black leather.

Pebble Steel will ship at the end of January. Orders start now at Pebble’s official site and “early orders” will get free courier shipping worldwide.

There may also be some good news for anyone who’s not prepared to order online, with some comments made during the presentation about retail availability in Australia. We’re waiting for details on this, and will update as soon as we get some solid information.

Pebble also announced today that it’ll be integrating the new app store it announced in December into their existing Pebble apps on Android and iOS at the end of January (likely timed to coincide with the Pebble Steel shipping date). They’ve also announced Pandora, ESPN, and Mercedes Benz as new partners who’ll be bringing apps to their platform.

Developers can’t charge for the apps installed through the Pebble Appstore (it seems Pebble doesn’t want to deal with revenue sharing and in-app purchases), but they can of course still charge for their own companion apps. Categories will include Daily, Remotes, Games, Notifications, Tools & Utilities, Fitness, and Watchfaces. Pebble’s become known for its vibrant community, from its roots as a Kickstarter crowdfunded project through to where the company is today. It was interesting to hear some statistics from Pebble around sales figures today, touting 300,000 Pebble smart watches around the world, with 3 million apps/faces downloaded. It’s also demonstrated that it knows how to play nice with this community, as existing third-party services for discovering apps and watchfaces won’t be shut out when Pebble’s own app store finally goes live.

Watch the full presentation below:

Will you be adopting Pebble’s latest baby? Perhaps you’re building a cool Pebble app? Let us know in the comments!

Woah, really like the new style! Much nicer and less ‘prototype’-like than the first.

Good news about the gorilla glass front too. I’d seen a few comments from pebble owners about the plastic face getting scratched pretty easily, and I really hate screen protectors.

Be nice if it could be thinner though.

This looks much better than the original. I’m very tempted to get one

Pebble owner from first Kickstarter run, so I’ll be giving this one a miss (though it does look very nice). I’ll probably upgrade once they improve the screen resolution, thin out the body a little more, and include some fitness tracking function.

I really like the new look and will definitely pick one up. A larger price hike than I would have liked yet i’m glad I held out and didn’t get an original at Christmas.