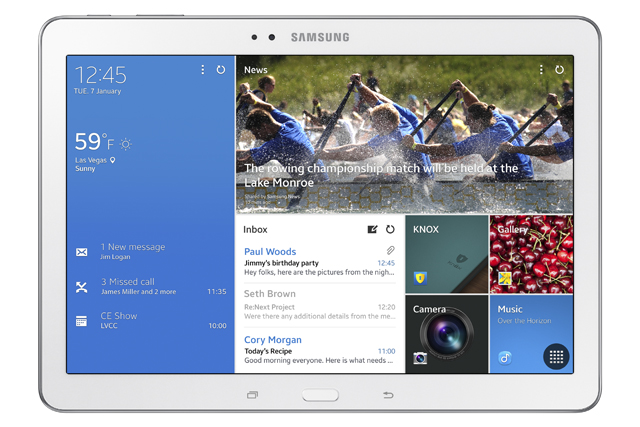 Android giant Samsung Electronics Co., Ltd (or Samsung as we know them) have today taken the wraps of two new product lines, the Galaxy NotePRO and Galaxy TabPRO across a range of sizes. Samsung sees these devices as the kick-off to a year in which it will dominate the Android tablet market, and it’s easy to see why they’re so confident.

The Galaxy NotePRO and TabPRO in 12.2″ feature a WQXGA Widescreen (18:10) display, offering a stunningly high resolution of 2560×1600, with more than four million pixels (yes, count them), making these two tablets truly marvellous for content creation and consumption. Imagine watching a high definition movie or TV show on this, and you might just get an impression of how this will look. Such a large display leaves one thinking these two tablets would be bulky, but no, at just 8mm thick, these devices are pretty svelte.

These tablets also feature a new user interface design, known as Magazine UX which allows users to really tailor the layout of their Galaxy PRO line of tablets to their needs. Samsung describes an easy-to-use dashboard with automatic feeds and news updates, and quick access to frequently used apps to really make media consumption an attractive proposition. Content is nice and easy to read on such a big screen (remember the original Kindle DX?)

Besides these killer features, there’s the standard features that Samsung is known for, including multi window (up to four windows running different apps on Android), the S Pen, Virtual Keyboard and remote PC features to seamlessly access desktops from your tablet.

The range of NotePRO and TabPRO come in a variety of configurations, including WiFi only, WiFi and 3G or WiFi and LTE, depending on market of course. The NotePRO will be the only model including the S Pen, as per the usual Note/Tab delineation. There will also be other accessories available, including book covers, USB LAN/HUB options, Bluetooth Keyboards and Mice, and more.

We look forward to offering Australians a wider range of tablet devices in 2014 starting with the launch of the new GALAXY NotePRO and TabPRO tablets in this market from March 2014. Todd Lynton, Samsung Australia’s Director of Information Technology and Digital Imaging

We also have the following video showing a fly-around of the Galaxy NotePRO’s features:

Below, we’ve got some specs if you’re keen to see what’s under the hood, but the highlights are these:

We’re definitely keen to find out this information – we’re on Samsung for release dates, as soon as we find out anything we will definitely be posting it.

When the F they are going to release this in Australia?? Its March already and not ETA.

Samsung said “FROM March” not “in March”

The Tab Pro 8.4 looks mighty impressive given that very hi-res display. As long it’s priced below the base model price of the iPad retina mini, it will be a sure buy for me. The Nexus 7 2013 kinda looks too small now after having a go at the LG g pad 8.3.

Can’t wait for the 8.4 one. As long as the price isn’t as ridiculous as the ipad mini w retina 32gb I’m definitely choosing this over ipad. Any idea on its release date in Australia?

OMG, I was going to write a similar comment but looking at your Name, I thought I already wrote it lol. Same! I hope they price it around the $399 mark. It says it will be released after March. Can’t Wait