It’s only been a week or so since the Galaxy Note 10.1 (2014) arrived at my place, and already I’m getting a handle on the device. As a Samsung phone user (Samsung Galaxy S3 followed by my current daily driver, the Galaxy S4) the look and feel of the device physically as well as the software behaviour was very comfortable to me as soon as I turned the tablet on.

The traditional “helpful” behaviour of Samsung’s Touchwiz UI was there and as predictable as usual. I found it interesting that S Voice seems to have a few tablet based quirks that either weren’t present or I didn’t pick up at the time I was doing the Galaxy Note 8 review, but there were some pretty hefty downloads required to get S Voice and some of the other UI features fully functional.

One thing that did strike me early is that some of the apps I use regularly on my Galaxy S4 don’t work on the new tablet despite being from the Samsung Apps Store: Foxtel Go and Plus7 being the main offenders at the moment, which frankly is a little disappointing for a flagship device that has such a nice screen.

Without going into the full detail of the device which will be in the review, the important points are:

So far it’s not blown my mind, but it’s certainly keeping me happy and the performance is very impressive! That reliable and snappy performance is something that we’ve come to expect from Samsung, so this wasn’t a huge surprise to me. Even when multitasking with YouTube video and working in other applications I didn’t have any noticeable lag issues or any other serious performance degradation. 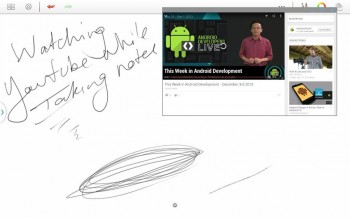 The battery life of the Galaxy Note 10.1 (2014) is pretty impressive, when you take into account the fact it’s a powerful piece of hardware that has a 10.1″ screen and quad core processor it’s near on staggering given the background apps I have running pretty much 24 x 7 and the fact I was streaming HD media for several hours. Needless to say; not just the battery life but the general performance of the device has impressed me greatly and I can unfortunately see myself trying to find a way to justify purchasing one to my wife in the near future.

I make no excuses for it, I personally believe that Samsung make good looking hardware. They evolved their look to be modern (at times edgy) but still safe enough that their devices can be sold as a mainstream product. The Galaxy Note 10.1 (2014) is no exception to this, it’s pretty but familiar in it’s look, feel and behaviour.

What I really like so far is the physical feel of the faux leather back, continuing the image of the Galaxy Note range with the Galaxy Note 3 that was released only a few months ago. So much so that I’ve taken it to a couple of meetings with me in my paid employment and the tablet has aroused a lot of interest from other attendees at the meetings, particularly when I’ve produced the S Pen and begun to take notes during the meeting; it’s not just functional it’s eye catching.

One of the features I thought was nice, but now I see that it’s actually really well delivered is the camera. It doesn’t match the 13MP camera in the Galaxy S4, but the 8MP camera in the Galaxy Note 10.1 (2014) delivers a really nice picture that could easily be mistaken for a photo taken by a higher quality camera rather than tablet. This only adds further weight to the regular discussions on the Ausdroid Podcast that Megapixels don’t make the camera, the optics and driving software do!

So far while not completely mind blowing, my experience with the Galaxy Note 10.1 (2014) has been very pleasing and I’m looking forward to spending some quality time with it over the next couple of weeks and putting a full review together soon after.

Are you in the market a new or replacement tablet in the new year? What will it take for the Galaxy Note 10.1 (2014) to be on your short list?

Grand scheme I think the criticism of the magazine interface is fair. But frankly I don’t see too many people using that for long.

As usual (trying to not sound too harsh on Touchwiz) I found that there was also an improvement in the general performance when I installed Action Launcher Pro, but did the review based on the “out of the box” experience.

no custom ROM is a big fail in my book

Hi Phil i have had the new device wifi only version for over 2 months via Harvey Norman. Exceptional tablet! But there are a few issues Samsung need to address. The first is their stock video player app. At first it hardly worked at all but they have recently updated it and it works ok now but the layout and view features are even more clumsy than before. Please dont suggest another 3rd party app. sammy stock should be brilliant out of the box. Second the boot up is flawed and the tablet appears to go through 2 iterations of… Read more »

I am going to defend Samsung’s stock video player.
It’s much more function than any other stock video player I’ve used. Much more codec support – what more could you want?
Design wise… heh, that’s a personal preference. But while I watch a video on full screen, the design is not going to matter one bit; you won’t see it anyways.
I can recommend you MX Player from Android Play. It plays literally anything. Don’t complain, just get that. Too easy.

You say you defend Samsung’s new stock video player? because its seemingly only better than any other video player that you have used previously. The old Samsung stock video player was MUCH better.
As a flagship Galaxy Note enterprise my expectation criteria is set to high. Any support from you expecting Samsung to ensure that their new stock video player should be at least as good as their previous stock version on performance and usability ?
Its way too easy to shoot the messenger.
Maybe its just your slip showing.

I use MX Player Pro by choice on all devices.
It offers me more control and functionality than other players do.

When looking at a display version it appears its using a pentile type screen? Like when looking at the battery in the top right corner its as though there are huge gaps between the green (sub) pixels…just something that annoys me…otherwise the screen is pretty darn good. Only weird though because its something i thought they did with amoled screens and i thought the note was lcd. I guess I’ll google it in a sec…

Yeah. I got mine about a week ago and began to notice the jaggies almost immediately on hard edges like the green battery icon. It is due to the pentile RGBW matrix they use which looks checkered when super zoomed in. Only very noticeable on straight edges in pure red, green and blue. Other mixed colour images and white/black text still look extremely sharp, so I’m not that bothered.

Sorry. Not trying to be a pain, but Samsung devices have been typically characterised by lag and stutter because of the bloated skin. Snappy performance is something I would never associate with Samsung – at least not in recent times.

Flagship Google and HTC devices, for example, are widely accepted as much snappier than Samsung’s.

What Samsung devices have you used recently?

The Galaxy Note range have been exceptional and (I have changed to Action Launcher Pro) my S4 rarely has any issues with stutter or lag.

Hi Phil. Is my response going to get approved?

What response?
I’ve looked in comments, nothing pending or in trash…

I wrote a lengthy response last night and after I clicked “post” it said it was awaiting moderation approval. This is actually the second time this has happened to me in the last month.

On both occasions I provided links to other sites which could be the issue.

I think you’re dreaming mate, or just looking for an argument.
Also, a lengthy response? Forget it. TL;DR. Just summarise it.

Well, no, because it was a lengthy response for a reason. I’m not looking for an argument. I’m looking for my post.

It was indeed because you had included a link in your post – we prefer you don’t due to the fact they could lead anywhere, mainly the shortened URLs some people include – but since it’s just YouTube I’ve dug it out and approved it.

Thanks very much, Daniel. I’ll remember not to link in future.

My other missing comment was from a recent thread on Commonwealth bank unveiling NFC functionality for their app exclusively for Samsung devices.

The Note 10.1 2014 shows huge amounts of stutter and lag when the Verge did their hands on review of the device a little while ago. Considering how specced up it is there’s simply no excuse for this. http://www.youtube.com/watch?v=UO_-ovujTEw View from 2.01 More recently, I’ve tried a GS4 and while it’s more than acceptable for general use it’s simply not as smooth and fluid as something like a Nexus 5 or HTC One. For a company that markets themselves as a leader in mobile technology it would be great to see them start putting their money where their mouth is.… Read more »

Yes, it’s technically the largest phone on the market at the moment (phone with a 10.1″ screen!!!)