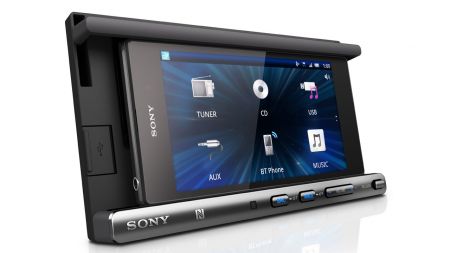 Sony debuted a new cradle at CES that allows your phone to be incorporated into their in-car entertainment systems.

The XSP-N1BT is a cradle / double DIN receiver for your smartphone, allowing you to control your in-car entertainment experience with a touchscreen interface. Bluetooth connectivity means you have full control over the functions of your head unit, including the source (USB, CD, Aux input or radio), Volume, Balance and Equalizer settings.

As with many of Sony’s recent mobile products, it’s nice to see that they’re not practicing ecosystem lock-in – the cradle will work with Sony’s own, and non-Sony, Android devices (via bluetooth) and iPhones (via USB).

The obligatory charging capabilities – a market expectation – are included in the mount, as well as a host of outputs that interface with other in car systems such as LCD screens and navigation. Sony has also hinted that there’s more to come in the near future from them on the in-car entertainment side.

Bear in mind that as a commercially available product (which means it’s “mounted” as per the laws in various states), this won’t excuse you from any fines you might incur for using your mobile device while driving.

Niche product, or does the XSP-N1BT have a commercial future? Let us know what you think of the potential for this world-first device.

This is exactly what I have been (repeatedly) proposing to my Sony sources for the last year or two (well, I didn’t propose the built-in tuner/CD player part, but everything else I did)… And they finally did it!

This folks, is the future of in-car entertainment and will sell like hotcakes!

That just looks sweet, hope it comes to NZ.

Awesome. If it can replace my car head unit i will definitely consider it. Sony magnetic charging a major plus for me.

If it has QI charging I’m sold

Sort of – it charges via the magnetic pins on the side of many high-end Sony Xperia smartphones… Smartphones from other manufacturers will need to use an external power supply.

In saying that, Sony IS part of the Wireless Power Consortium, so it is likely that so-called “Qi” charging will become available in a future model…

This looks awesome! Nice that Sony aren’t locking it to their own line of products a la Samsung style!