CyanogenMod are making a very big effort to commercialise their venture lately. Initially announcing that they were moving from the crowd-source code that has dozens of contributors to a more commercial model, then onto the CyanogenMod phone (the Oppon N1 CM Version) and the installer that makes installing CyanogenMod a breeze even if you don’t know what “root” is, how to boot into recovery on your Android device or even what a custom ROM is.

Having been a CyanogenMod (CM) user for some time and particularly recently, I’ve been missing the functions that CM offers that Touchwiz doesn’t. I decided that rather than go down the usual path of using a cf_autoroot, custom recovery and finally installing the ROM manually, I’d give the CM Installer a go.

I attempted to approach the process as a complete novice who was installing their first custom ROM on a phone with hesitance. So I went to ol’ Uncle Google and searched for “download Cyanogenmod Galaxy S4”. A number of results appeared, including YouTube tutorials (I stored a couple of those for reference later), some dodgy looking URLs, XDA Developers (while I know it’s probably the best place to go, “developers” is a scary word to those who don’t know) and “get.cm” which stated in the short results list:

That sounds like the place for a novice to go, so off I went.

The first thing that struck me was the lack of “scary” words and references on the page, it really was a 4 step process that ended in step 5 being “Enjoy CM”.

That doesn’t seem too scary, let’s give it a bash!

The steps outlined are

Having now gone through the process, I can assure you it really is that easy. As long as you’re comfortable with trusting the CM app on your phone and installing the Windows based installer on your PC you don’t need any further knowledge than that.

On successful installation of the app on your phone, you’re told to download the installer for your PC, plug the phone into your PC and follow the on screen instructions. The installer takes you through the obligatory “this process will wipe all of your data” and “going through this process may void your warranty” and they mean it, your phone is wiped clean and some manufacturers will (at least attempt) to void your warranty based on a custom ROM on the phone. 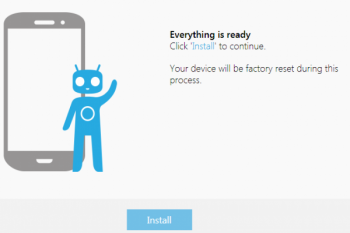 The rest is automated; your phone will be rooted, custom recovery installed, the latest stable version of Cyanogenmod for your device (automatically detected by the software) will be downloaded to your pc and pushed to the device. The entire process took me less than 15 minutes, I will note that when I was downloading the ROM I was on a 30Mbps downstream connection which would have taken a reasonable chunk off of the install time compared with some users.

Given how fraught with danger the original processes to root and install a custom ROM on an Android phone were, I don’t think this installation process could be easier. The team at CyanogenMod have done a fantastic job with the app and the installer softwares which brings the world of custom ROMs into reach of the average user who doesn’t trust the process or themselves to get it right.

It’s worth noting that while most of the team at Ausdroid do root and change ROM on our phones regularly, we’re not here to tell you should or should not do it. This article has been written to convey how easy the process through the new CM installer setup is and to alleviate the fear and reservations that some users have about the process and the potential to brick your device.

Does the simplicity of installing CM through the app and Windows based installer remove some of the fear you may have had about custom ROM installations? Let us know your experiences with custom ROMs

Tried the installer about a month ago on my Nexus 4. Super easy process and nice graphics letting you know what’s happening. Unfortunately, CM was super buggy (bad GPS, bad WiFi, bad 3G connectivity, buggy+stuttering notification drawer, force shutdowns) that it was un-usable. And no, I was not downgrading from 4.3 or 4.4, which often causes many problems.

But the battery life was great!

I may drag out the old Galaxy S 1 and give this a crack..

My sisters old GS1 is still kicking on 4.2.2. Runs extremely fast too. Almost as fast as my S4. The joy of the community.

Does it automatically install gapps too?

Yep, well the base stuff – Play store and Gmail.
But that’s all you need to get all your favorites!

Beauty, that means it includes all the core googley framework stuff. Super easy.

Yep, it’s really good and extremely easy to do.

Seems it only supports the devices that are easy to mod. HTC?