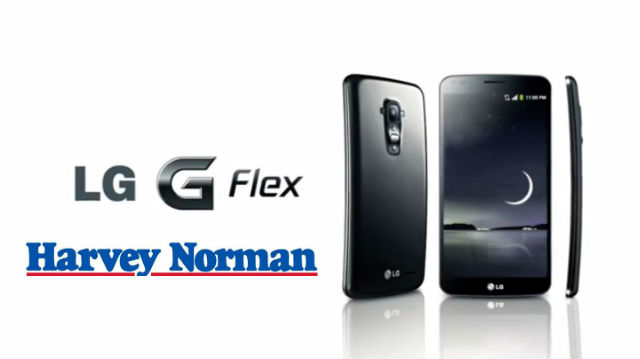 After a successful showing at CES, where it was launched for US Carriers, LG has just announced that the LG G Flex – the phone with the flexible curved screen and ‘Self Healing’ coating on the rear – will indeed be coming to Australian shores, but won’t be available through a carrier, instead it will be offered exclusively to customers through retailer Harvey Norman.

Starting, with pre-sales online today and coming to stores in February, the G Flex will be launching in ‘Titan Silver’ with a retail price of $999, making it slightly more higher end price wise than your average handset. While not subsidised by carriers, Harvey Norman will be offering a bonus to tempt customers into outlaying the $999 to purchase the phone – a $200 Harvey Norman gift voucher – if they are willing to sign up to an Optus ‘My Plan’ in the month of February.

Hardware wise the phone comes with the remarkable 6″ HD P-OLED(Polymer based OLED screen), which is not only curved, but flexible as well making it a very hardy device when it comes to those moments when the screen needs to flex. According to LG, the curve also brings the microphone in the phone closer to the users mouth. Adding to the overall durability is the remarkable ‘Self-Healing’ coating that’s been applied to the rear of the phone that will protect the phone from the every day scratches that normally mar your average smart phone.

The LG G Flex will arrive in Australia running Android 4.2.2 and brings many functions and features from their current flagship phone the LG G2. The G Flex comes with the same rear mounted power and volume buttons, as well as the fantastic KnockOn option which allows you to double tap on the screen to wake it. Also included is Plug & Pop, Guest Mode and 24 bit/192kHz Hi-Fi Audio playback.

LG has also included functions such as QTheatre for accessing videos, photos and YouTube from the lock screen, a Dual Window mode to divide the 6″ screen into seperate windows for multi-tasking and Swing Lock Screen. LG has also thought about using the phone for taking photos, offering Face Detection Indicator which illuminates the LED surrounding the rear mounted keys in green when a face is detected, a camera timer that makes the rear LED glow when activated and an Urgent Call Alert that lights up the rear keys when several calls from the same person have been missed.

And the link to pre-orders is now online on the Harvey Norman Website, we’ll be watching and updating as soon as it’s available. It’s a pretty interesting phone and we’re looking forward to taking it for a test drive as soon as possible.

You seem to be able to preorder it now.