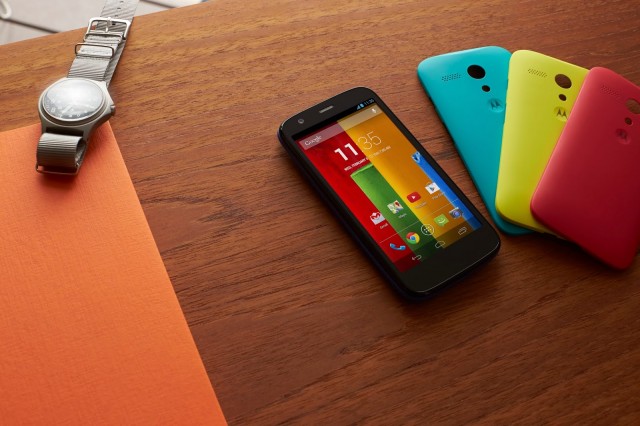 When Motorola launched the Moto G in Sao Paulo Brazil they announced that they would be launching the phone here in Australia in Janurary and ever since we’ve been checking retailers in Australia for news of the launch, with so far only Telechoice acknowledging that they will be carrying the device. But an official launch appears imminent with Motorola updating their Australian website to feature the Moto G.

The website lists all the specifications of the entry level phone, listing the highlights as being the ‘sharpest 4.5″ HD screen in its class, all-day battery, quad-core processor and Android™ 4.3 with guaranteed upgrade – an upgrade which is already rolling out to Moto G phones in the US and Europe where it has already launched.

So far Telechoice is the only Australian retailer who has listed the 8GB Moto G as available either on contract on their $40 plan or outright on $279, with stores advising they are receiving stock now.

When it launched, Motorola listed details on several accessories, or shells, that would be available for the Moto G. Motorola is listing 15″ coloured shells will be available and they’re listed as coming soon on their accessories website. The range seems to include all 7 colours – Black, White ‘Chalk’, Cherry, Lemon Lime, Turquoise and Violet – announced in Flip Shells and the standard removeable backs simply called ‘Motorola Shells’. While the updated website has no details on availability, an official launch cannot be far away. We’ve contacted Motorola for confirmation on the launch details for the Moto G and we’ll update with more details as they come up. Until then, you can check out our first impressions post on the Moto G and expect our full review very soon.

Have you grabbed a Moto G from a Telechoice store or imported one?

I am more intrigued to find out whether a Google Play Edition will make it’s way down under, guaranteeing up to date android updates. Else, I suppose I could just buy one of the Motorola ROM’d ones and install the GPe firmware on it. Does this even sound possible?

Jeni – There’s a number of sites that will import the Moto G – Telechoice is selling an Australian Moto G officially.

I should probably read this “Ausdroid” site!