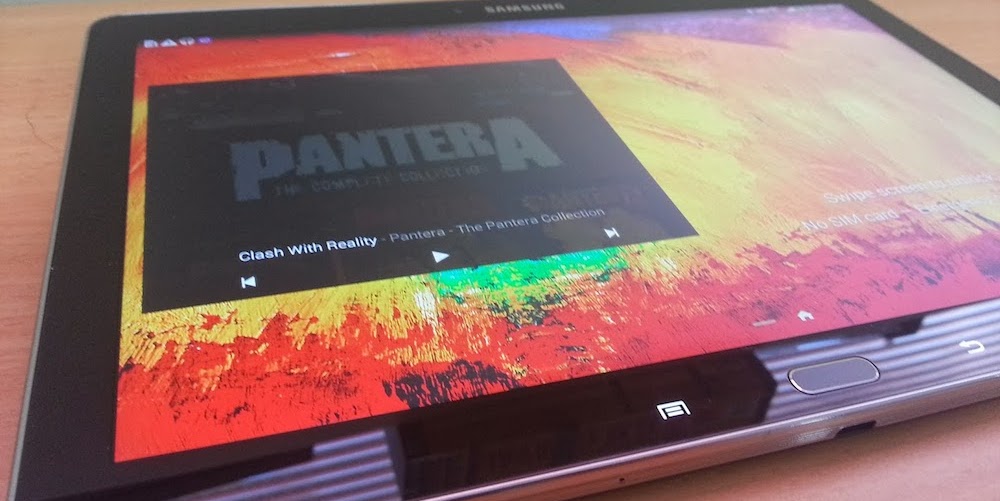 Apple’s iPad has held the lion’s share of the 10” tablet market since its launch, so there’s no surprise that many of the 10” tablets in the higher end of the Android market use the iPad as a benchmark.

Samsung’s most recent contender in the 10” tablet land is the Galaxy Note 10.1 (2014), which is the new iteration of the original Galaxy Note 10.1 released in 2012. It comes inside wood-grained cardboard packaging, as well as a wall-charger, MicroUSB cable, earbuds, and a SIM / Micro SD removal tool.

Superficially, at least, the packaging and the tablet itself bear a strong resemblance to Samsung’s earlier releases; a consistent design language and manufacturing process has allowed Samsung to develop its own unique first impression, making it easy for users to transition from one device to another, to upgrade, or to switch between phones and tablets.

Let’s see what’s inside this one.

Not all tablets suffer from the sound issues… The Nexus 10 has amazing sound for a tablet… Made by samsung but they like to break the good things. Is it too much to ask for good audio? I am trying very hard to wait for the next possible nexus 10. Since I gave my nexus 10 as a gift to my mom. I’m tempted to buy it again if nothing comes out!

seems AOSP-based ROMs on non-nexus tablets are on the declined. the last one that has seen such is the Tablet Z.

PANTERA!! that is all. move along.

I would love a Nexus version of this (without the hardware button or touchwiz). Come on new Nexus 10!

Isnt the snapdragon variant 2.26ghz? Ie. 4g model. Anyway. Cant justify it if i have a note 3…

Hi Phil BRILLIANT DEVICE… I have had one for 2 plus months and find that Samsung still don’t have stock at there Experience store in Maribyrnong of the official covers. As a Samsung experience goes that’s a BIG letdown. Apple would never allow a little piece of moulded plastic to create a FIASCO like this to damage their hard earned world leading technical developments. I have the SG Note 3 phone too, so you can see that I have the money to have the best AND the best it is in the market and I will also add to the… Read more »

Had mine for a week, first droid tablet after 3 iPads, and I love it! Curious as to why you list the SIM model price, as surely all us geeks just use our phones as hotspots? Paid $679 at JB Hi Fi for the wifi 16gb – comparable to iPad price and while the build quality isn’t at iPad Air quality, it’s pretty damn close.