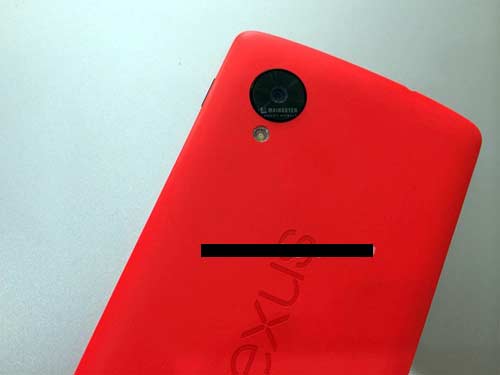 Yesterday a website put up a slideshow of a supposed ‘leak’ of the Google Play store showing new colour options for the Nexus 5, while those pictures appeared to be quite fake and poorly rendered; today we see a picture of a Red Nexus 5 apparently hanging out in the wilds of Vietnam and it’s apparently not alone with sources indicating a yellow version could be on the way as well.

The Red and Yellow options fit perfectly with the Google’s colour choices for their accessories on the Nexus 7 sleeve as well as the Nexus 5 Bumper case.

There is precedent for extra colour options of Nexus devices being released to market after the initial release with Google releasing the white Nexus 4 almost 6 months after the initial release of the black version. The White Nexus 4 was made available exclusively in Australia through retailer Harvey Norman, but with expanded retail availability of the Nexus 5 this year, they could show up in other stores.

The colour variants are expected to hit the market in February/March at least in Vietnam, with international expansion soon to follow. A bright red or yellow phone may not be my particular cup of tea, but it would certainly be some peoples choice and more options are always good for consumers. The next question is when can we get them.

Would you purchase a Yellow or Red Nexus 5?

The back of a white nexus clips off pretty easily. Just sell the back for 10 bucks and I’ll be happy.

I would love to see a Blue version

Red or yellow would both be awesome.

That’s a cover, right. The Google covers decrease the camera bulge to almost nothing and replicate the nexus logo. Like that picture.

Not a cover. The Nexus 5 covers have more squared off edges.

That doesn’t look like a case, but it could be one of those vinyl stickers (e.g slickwraps, dbrand etc)

Doesn’t look appealing to me….