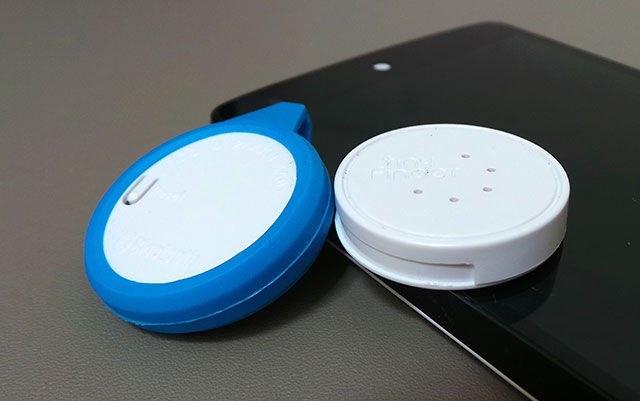 Much of the evolution of Bluetooth devices in recent years can be traced to the BLE standard (“Bluetooth Low Energy”). Where before your it was fine for your phone to connect to a headset to make/receive calls, these days your device must now be capable of connecting to your fitness tracker, keyboards, mice, speakers, headphones and home automation systems.

TinyFinder, a small tracking device available from Expansys in a twin pack or a four-pack, adds another responsibility to this already impressive slate – your device is also now responsible for tracking your stuff, and perhaps even telling you if it wanders away.

The TinyFinder device is a small, chunky plastic disc that can be attached to things that are important to you that you don’t want to misplace.

The device itself is a small white disc a little larger than two 20 cent coins constructed entirely out of plastic. It’s shipped inside a bright coloured rubber/plastic surround with a large square loop on top so that you can add it to your keychain, but the TinyFinder itself can be popped in and out of the surround with relative ease.

Once you’ve attached TinyFinder to an object, you can track it with the app on your phone or tablet. The app not only shows you (roughly) how far away an item is from your current location, but also lets you activate an alarm if you can’t find it, and set an alarm to go off if the tracker goes out of range of whichever device is running the app.

During my time using TinyFinder, I naturally attached mine to my keys so that I could find them whenever I needed to. Beyond my keys though, I struggled to think of other things that I could attach a TinyFinder to. You could put it into the coin pocket in your wallet. Luggage is a good option, but it doesn’t provide a frequent enough test case for me, and it’s not really an item that I’m responsible for losing (airlines, on the other hand…). I was tempted to attach it to my cat, but I figured he’d wander out of range pretty quickly (and did), and would probably also be pretty annoyed at that thing hanging around his neck. I also considered attaching it to my nephew while on holidays recently, but my sister wasn’t too fond of the idea.

Part of the problem in making this decision lies in the design of the TinyFinder device itself. While the name makes it out to be tiny, in reality the device isn’t really that small. It’s a noticeable presence, and contains a CR32 battery within. According to the packaging, the battery is rated to last 1 year with 30 minutes of use each day.

I found the TinyFinder an awkward addition to my keychain, mainly because the keychain attachment itself is a bit poorly designed. Becuase of the large size of the device and the chunky plastic loop built into the outer ring, it never really felt “at home” on my keyring, and I was constantly aware of its presence — I guess this is the price one pays to track one’s keys. I’m also a little worried that the plastic construction might break easily.

Concerns about the size and construction aside, the main problem I had with TinyFinder was probably the software.

The app works — it does, in general, what it says on the box and shows the TinyFinder’s approximate distance from your current location. But beyond the basic functionality, confusion starts to set in.

Functionally, the app provides a catalog of your TinyFinders – the included pamphlet says your device can support “over 8” TinyFinders, but doesn’t give the actual upper limit — and lets you see them all on a “radar view” that shows how far away the TinyFinders are, although it can’t give you a direction. You can also set it to sound an alarm when the device is out of range, and on-demand when you’re looking for it.

That’s where the good stuff with the app ends, unfortunately. All-too-typically, the app is really little more than a badly thought-out, poorly-designed user experience that’s obviously been hastily ported from iOS, and I suspect it really isn’t any better on Apple’s iDevices.

The app runs full-screen for no good reason, and violates nearly every Android UI design principle there is. At one point while looking at a Google Map showing the location of my devices, I pressed an overflow button expecting to set some preferences but was instead greeted with a list of the open source licenses used in the app – I’ve no idea why the developers thought it was important to put that information in that area.

This confusing arrangement of buttons, labels and functions continues elsewhere throughout the app. The “distance” button says “near” but it’s not an indication of where the device is, it’s an alarm threshold. The “Find it!” button could give you all the information the app has on the location of the TinyFinder in question (precise distance, last time it was measured, whether it’s actually currently connected, etc), but all it does is attempt to sound an alarm on the device.

You can also use the tracker in reverse – pressing the button on the tracker will sound an alarm on your phone or tablet, assuming it’s connected. If you’ve lost your phone you might only need your keys to find it.

The app also offers a Camera feature – you can use the TinyFinder as a remote shutter release on your phone or tablet and take a look around. Theorectically, this is quite a handy feature if you’ve lost your device but got your keys, but I couldn’t get this option to work – every time I pressed the button to trigger the camera, I ended up triggering the alarm instead of taking a picture. It’s also not clear what the app intends to do with the picture that’s taken – perhaps it’s supposed to send the photo to my notification email address (which would be useful).

You’ll also end up with a permanent, ugly, bright green TinyFinder notification. While this has likely been done to keep the app running in the background, doing so should be my choice, and there’s no easy way to get rid of the notification.

The main screen for interacting with the TinyFinder tracker.

The app’s main screen lists all your TinyFinder trackers.

On first run, you’ll be asked for a notification email address (I haven’t received any notifications yet…)

You’re supposed to be able to use the button on the TinyFinder to take a photo on your phone. In practice this doesn’t work so well.

Settings are found under the “Info” panel.

Confusingly, the documentation tells me that if a TinyFinder remains disconnected for more than 48 hours, it’ll shut down and require a press of the reset button to reconnect it. I say “confusingly” because the TinyFinder app at no point actually alerted me to the fact that my keyring had become disconnected – until I ran the app directly. It should have alerted me when it become disconnected, based on the distance alarm rules that are configured in the app.

This alone really seems to defeat the entire purpose of using TinyFinder to track your things, and feels like a shortcoming in the design of the app. Perhaps it can be addressed with a software fix in the future.

I feel like I’m being pretty harsh here, but the reality is that I find TinyFinder’s user experience frustrating, confusing and unclear and that gives me pause in trusting it to locate my valuables when I actually need it — are they nearby and disconnected, or has some nefarious criminal mastermind made off with them? I can’t tell.

Ultimately, TinyFinder seems like it’s a better idea than it is an implementation. It’s priced competitively against similar devices, and is definitely cheaper than some of the all-in best-in-class device finders out there. The devices themselves are larger than I’d like and need better materials, and the software is a confusing mess. With patience, you can get it to do what you want, although you’ll have to go through too many baffling, head-scratching, trial-and-error moments to get there.

The “item tracker” space is set to go big in 2014. There’s a number of tracking devices available or set for launch in the coming months like Nio, Kensington Proximo, Stick-n-Find and Find ‘Em, Chipolo and Tile. While some of those devices feature varying levels of Android support at present, it seems likely they’ll all eventually go there in one form or another. TinyFinder’s appeal is that it’s here now, and the price is about on par in comparison to some of the other trackers out there (you’ll also find them going on sale occasionally at Expansys). It makes a neat birthday gift for someone who might have everything, except a way to track it all.

It feels like the basic feature set for these tracking devices has been nailed at a software level, but we’re still waiting for the perfect implementation of the app. I’d love to see a proper app that is intuitive to use, and pair it up with a more smaller, more durable device. Maybe version 2 will get there…

Do NOT Buy the FindEm Tracking Wallet Tracker

I bought 2 of them, neither works, and “Customer Service” told me tough luck

DO NOT BUY FINDEM TRACKING PRODUCTS

“The app also offers a Camera feature – you can use the TinyFinder as a
remote shutter release on your phone or tablet and take a look around.
Theorectically, this is quite a handy feature if you’ve lost your device
but got your keys…”
You don’t use this feature when you’ve lost anything – it’s used to take photos without needing someone to stand behind the phone/camera and press the shutter button. That way you get everyone in the photo.
Also: *Theoretically

Resistance? You have been deceived.