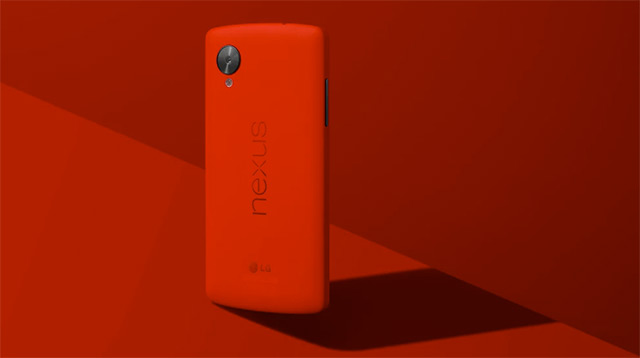 After seeing rumours of a red Nexus 5 for the past few weeks, this morning it became official as the device was released for sale on the Google Play store with the tagline “live colorfully” (we’ll have a word to them about the spelling later).

The new variant is available in the standard 16GB and 32GB colour variations for the same prices as the existing black and white models ($399 & $449 respectively). If you’re tempted (as I am), the standard shipping times and delivery charges apply.

Besides the striking new “bright red” colour, this is the same Nexus 5 we all know and love internally. It’s notable however that the Bright Red phone’s body is also coloured red, as seen in the profile shots – the “white” version has a black body – but the face is still black. Google’s much-vaunted porcelain buttons also remain black. My white Nexus 5 is looking a little nervous this morning. I seem to have developed a fondness for red colouring in the past few years, either on my phones or my cases, and I like a nice bright colour so my phone’s easy to find. This is right up my alley, and I suspect there’ll be a red-Nexus-5-shaped dent in my credit card before the day is done.

It all begs the question, why wasn’t the red colour available at launch? If I’d known it was coming, I might have held off. It’s a question that’s also bothering others this morning, too:

Adding the option of a red Nexus 5: great.
Releasing it months after launch & denying early adopters the choice of buying it: not so great.

Chris has a point, and I can’t help but feel slightly disappointed that I’m considering buying a new Nexus 5. It’d be nice if Google would tell us what it’s planning so I can choose the right colour – recall that the rumour that started it all 2 weeks ago said there’s also a yellow one coming.

Maybe I should look on this as a chance to get my “old” Nexus 5 into the hands of someone deserving. Will you do the same? Tell us if you’re interested in the red Nexus 5. Are there any other colours you’d like to see?

Is it really red or it actually orange like The Verge said?

I think it’s more of an orange than an actual red. Like a really intense tangerine colour. I don’t think it’s actually ‘red’ as they’re advertising it.

It looks quite nice…not too screechy, but vivid nonetheless

Looking forward to opinions on it and any hardware differences.

The thing to also bear in mind, and to save your bank balance, is that there is scope for a 64GB option in the Nexus 5 (the flash chip used comes in 16, 32 & 64GB options). So google could relatively easily bump the memory to 32GB/64GB options around April/May if they wanted – a much more sensible combination.

Yeah I was seriously considering replacing my white N5 with the red… but then i just can’t justify it costwise… UNLESS they release a 64gb version. Then i’ll be all over it like a fat kid on a cupcake

I’m glad I hesitated before actually buying for that very reason, I would have preferred a 64GB. However that being said I never come close to filling 32GB so the fact that Red is now an option seals the deal.