Home News and Editorial LG confirms Australian launch of Chromebase, the Chrome All In One Desktop 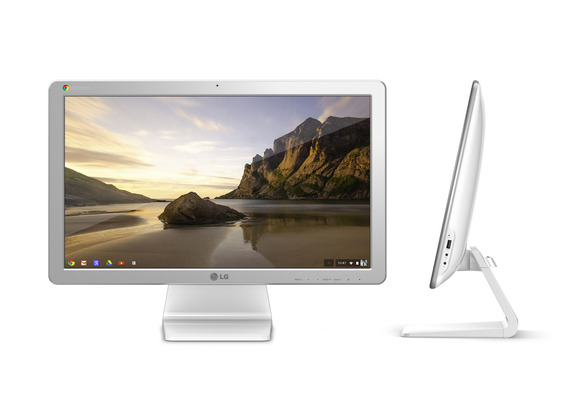 LG has announced that its Chrome All-In-One (AIO) Desktop, dubbed the Chromebase, will launch in Australia in April, with a suggested retail price of $599. LG is confident that the Chromebase will become widely adopted in home, school and office environments alike, as it represents the future of desktop computing.

For those who missed the announcement at CES 2014, the Chromebase is a ChromeOS machine integrated into a display reminiscent of the Apple iMac in terms of design. Underneath the hood adorned by a 21.5″ IPS display is an Intel Celeron processor, 2 GB of RAM and a 16 GB Solid State Drive (SSD), which is fast becoming the defacto standard for ChromeOS machines. A webcam and microphone are also integrated, meaning that video conferencing with Hangouts will be readily available, and even compatibility with Chrome for Meetings could be possible.

We’re keen to get our hands on a Chromebase to review the hardware for you, and as soon as we do, we’ll let you know. In the meantime, if you’re keen on getting a Chromebase for your home or office, let us know in the comments below!

Trendy little machine this. I hope they bundle a matching Keyboard & Mouse. I suspect lots of folk would like a quiet, attractive, space saving machine that requires virtually no maintenance. I reckon these would be great in a hotel type environment too. One admin account and everyone else browses as a guest. Too easy.

Need more local storage. 64GB minimum then I might pay a bit of attention. I love what chrome is doing, especially with offline chrome apps but 16GB is far too limiting.

Space is the only thing holding chrome books back. I know there meant to be cloud based, but Australia is far off from adapting to the cloud. Many people still have bad slow internet plans.

I have a chromebook and have never worried about local storage.
Either way with this you can just plug in a discreet 64GB USB key or a massive HDD if you were inclined to give up the cloud computing.

Will it have AC3 audio support?

No. The supported file types can be found here : https://support.google.com/chromebook/answer/183093?hl=en

But, AC3 is an officially licensed codec and as an Open – or at least semi-open – source OS, Google only includes free codecs and this is not free. So, no. But you can install Crouton and install VLC which does support AC3.

thanks for the explanation, and the tip…unfortunately, reading the github crouton page amounts to ‘never gonna happen’ for me, but at least there’s a way around it that doesn’t involve re-encoding