The launch of the Galaxy S5 is widely expected to be in just a little over a week at Mobile World Congress at the Samsung Unpacked 5 event the company began teasing last week. But, if this leak is to be believed, the closeness of the event means that retail packaging is close to final and has apparently made its way into the wild.

With a similar design to the current line of recyclable cardboard packaging of the current Galaxy line of devices, this picture shows a laundry list of seemingly dream specs for the upcoming phone, possibly, some would say even too good to be true. But if true it would represent an extremely large leap forward in the spec war that’s a constant in the Mobile industry.

While a spec list of this magnitude would certainly be attractive, there’s still a couple of issues. Firstly, Samsung introduced [email protected] video recording on the Galaxy Note 3 and it’s a little strange that they are looking to release their seminal flagship phone for 2014 with a mere 1080P Video capture and playback. There’s also what appears to be a different font colour around the ‘0.0’ in 20.0MP in the photo, possibly indicators of digital manipulation. Next, it’s a good idea to check out the retail packaging for the Galaxy S4 just to get an idea of what you should expect : 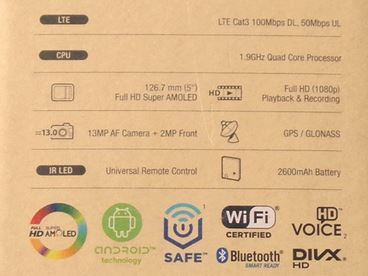 The formatting of text on the listing of the size screen description is oriented to the right, while the purported Galaxy S5 retail packaging is oriented right next to the icon for the screen. This is also true for the text for the CPU and radios.

It’s also worth noting that previous packaging hasn’t referred to RAM specs, and the wording around the smart remote just doesn’t gel with previous references to the IR LED and Universal Remote Control features.

In leaks of this nature, I’m your Fox Mulder – I want to Believe – and really, it’s on par with current rumours surrounding the device. But there’s a few inconsistencies and with leaks you always have to take them with a grain of salt. What actually comes out in just over a week is anybodys guess, but the above list of specs would be a great start.

Even if they were true. it wouldn’t make a lot of sense. There is no clammer for resolutions greater than 1080p – rather people want to see better battery life.

If they are going this way they are going to have to cut the price – the Nexus 5 is a better bet at a much lower price than the S4 has been pitched at. With its lack lustre showing on the previous model, Samsung need a come back. $399 for 16GB?

Samsung use the term Ultra HD instead of QHD.. Also that would make the screen have 4x more pixels per inch than before which I would have to call Bs on as it would be rediculous. Then not to record in the format would be like.. Why?
I call bullshit

Agreed; it would be a pure “Spec Sheet Marketing” move, rather than adding anything worthwhile or useful. And it would keep prices inflated.

You don’t even need 1080 on a screen. would rather battery life than an upgrade in res. Or just bring back the super amoled plus screen in 1080

definitely aiming for the active version,