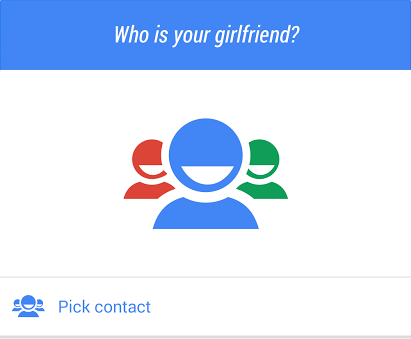 Google Search has become quite a useful tool, and in many instances proves to be a strong rival (if not a better product) than Apple’s equivalent voice search product, Siri. While most of the common features are (as the name implies) common to the two products, there are a couple of areas where Siri arguably excels. One is its witty comebacks to questionable voice commands, and another is its ability to remember who’s who (e.g. who your wife is, who’s your uncle, etc).

Today, however, that second shortfall is being addressed. Asking Google Search to call your girlfriend, mum, dad, or other relative will actually work, and if such a contact hasn’t been designated, Google Search will prompt you to set such a contact and it will remember it for later.

Personally, I don’t really use voice commands in Google Search all that often, and if I did, I don’t know if I’d be saying “call my girlfriend” .. in many cases, saying “call Rachel” (or whatever your partner’s first name is) will often be quicker and easier to say, and will sound less clunky.

However, for those who want the feature, it’s now here. Let us know how you find it.

Source: +Google on Google+.
Via: XDA.

Ok Google, who’s your daddy and what does he do?

This could be handy. My fiancé has a hard to pronounce name and Google can never understand what I’m trying to say. Hopefully the will make things a bit easier, even if it is a little clunky.

How does it deal with the situation where you have more than one girlfriend?

location awareness to call the closest one. Just in case there is one in the room.

FINALLY!! I like it and it works great. I had to add the phonetics to my sons name and add some details in his contact to say he’s my son.

Which will be amusing when it dials your ex-girlfriend.