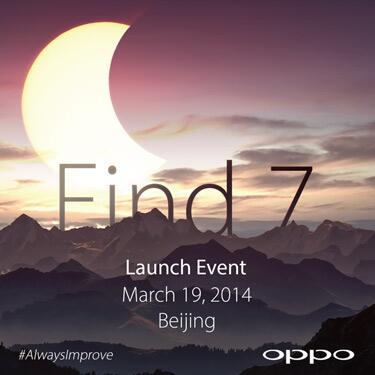 Oppo has been teasing their followup to last years Find 5 since the beginning of December last year, and have just announced through their Twitter account that the device will be unleashed on the public on the 19th of March in Beijing, China.

Through a series of leaks on their Social media pages, we know a fair bit about the screen on the Find 7, but there’s a lot still unknown left for Oppo to announce at the event. According to the carefully spaced out leaks from Oppo, the Find 7 will have a protective layer over the 5.5″ 2560×1440 resolution 538PPI screen and a ‘Touch On lens’ which could be similar to the KnockOn feature from LG phones, unlike their current offerings – the N1, Find 5 and R819 – the Find 7 will come with LTE radio.

The phone should be available in Australia through the usual Oppo online retailers – OppoStyle and Mobicity – with pricing and release dates to be made known at the event.

Are you interested in the Oppo Find 7? Does a QHD 2560×1440 resolution screen excite you or do you feel it will use too much battery?

As it currently stands, the only smartphone to consider buying over the next couple of months is the Find 7. OnePlus One with similar specs minus ultra fast charging and Oppo’s superior 13mp camera tech, is ‘invite only’…….simply the wrong way for a new player to break into a very competitive market. LG’s G3 could have also made the top 3, but apparently has chosen to go with Qualcomm’s now dated 800 processor instead of the current 801 or what many have thought it might be released with mid year, the cutting edge 805. LG is offering waterproofing which still… Read more »

It will consume too much precious battery life and plain and simply, not required!