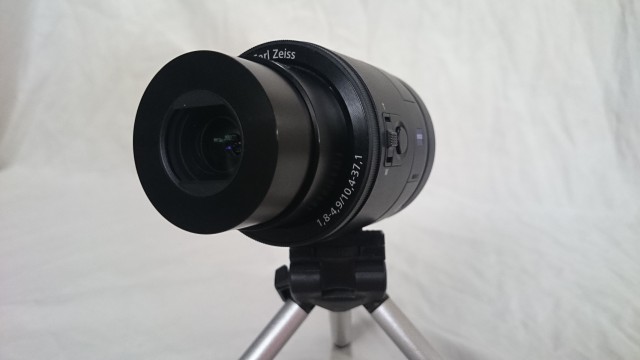 Camera phones have been around for more than a decade, and not a lot has changed with their overall function in this time. Modern smartphones may have more advanced specifications compared to the early camera phones, but they still function like a simple point and shoot camera. Now Sony is trying to change our views on how smartphones interface with cameras with their range of QX lens-style cameras. These cameras look and function similarly to a compact camera lens, with the ability to control it from any Android (2.3+) or iOS device.

The Sony QX100 camera includes the 3.6x optical zoom lens and 20.2 Megapixel Exmor R image sensor, which is found in Sony’s high-end RX100 compact camera. This, combined with NFC and WiFi Direct technologies, makes the QX100 a popular option for taking high quality photos with any Android or iOS smart phone. However if you were after a lens-style camera with a higher magnification zoom, the QX10 incorporates Sony’s 10x zoom G lens with a 18.2 Megapixel Exmor R image sensor. Both the QX10 and QX100 include optical image stabilisation, to reduce the possibility of capturing a blurry picture.

I’ve spent a couple of days playing with the QX100 – here’s my first impressions.

When the QX10 and QX100 launched at IFA Berlin last year, I was fairly impressed in the overall look and feel that Sony had produced with these cameras. Now that I’ve managed to get a hands on with the QX100 I can confirm that Sony have done a great job in designing a compact camera specifically for use with a smart phone. The QX100 has a great ergonomic design and is fairly easy to use regardless of whether or not the camera is attached to a phone.

One key consideration with the QX100 is the overall size of the unit. The QX100 is nowhere near as thin as your typical smart phone, therefore it can be a bit of a nuisance to carry it around unless you carry it in a handbag, messenger bag or backpack.

I also found a disappointment on controls for video shooting – the shutter button can’t be used to start or stop a video recording. This may be difficult to implement on the current range of QX cameras, although it is something that would be nice to have in future models.

If you’re not familiar with the Sony QX100 already, the camera interfaces directly with the PlayMemories Mobile app on either an Android or iOS device. You can get the app for free from either store.

The app allows the user to control the camera and capture photos/videos via a WiFi Direct connection. Out of the box, the QX10 and QX100 don’t include the ability to change the ISO setting or record video in Full HD (1080p) but these features were added in an update that Sony released late last month. For me, the PlayMemories app runs well on my Xperia Z1, although I have noticed a small amount of lag while streaming the display. This doesn’t seem to be a big issue though, and it’ll vary according to the device that you are using as well as how much interference is in the area that you are using the camera.

Keep an eye out for the full review of the QX100, coming soon.

This is one expensive phone lens…