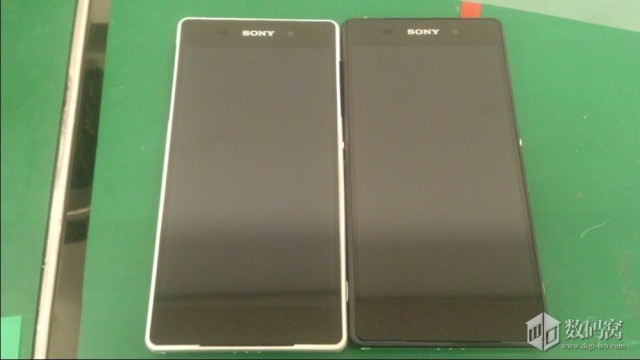 The next Sony flagship phone, known by the codeword ‘Sirius’ has apparently been getting around a fair bit with the device appearing last night in a video tour of the UI from the phone and now tonight the black and white versions have appeared on Chinese site Digi-wo.

The video tour concentrates on the UI but not the hardware, the maker of the video assures us the software is not final but still in testing. The video shows the lock screen complete with Camera shortcut and a look a the Camera App later on, there’s also a demonstration of the Walkman App and Walkman Lock-screen music controls. There’s also a good look at the Live Wallpapers and themes as well as Gallery App, as well the various widgets included in the Sony UI. It’s a pretty thorough walkthrough and worth a look to see what’s possibly coming up.

Finally, hardware has shown up, in both White and Black colour options. The leaker has placed the phone next to an Xperia Z and Z1 showing the last few phones in the Z line of flagships :


The leaker advises that the launch is planned for April and the Logo will no longer be attached to the permanent screen protector, which itself could actually be left off the ‘Sirius’.

The rear of the Sirius has also shown up thanks to Japanese spare parts supplier, Moumantai who has listed the rear cover, as shown below on their site for 4,000 Yen(About AUD $44) although they’re not available to order.

With MWC fast approaching and an apparent April launch, there’s obviously Test devices out there and parts suppliers have spares on hand, so further leaks of pictures of the parts or the parts themselves could possibly leak between now and the launch date. More importantly hopefully Sony release some official teasers of the Sirius and maybe even the tablet ‘Castor’ in the next month or so.

What do you think of the UI and hardware?

Transparencies and a sparkily magical lock screen, but still pretty much the Sony skin. Which is fine. It’s a cleanup rather than something radically new.