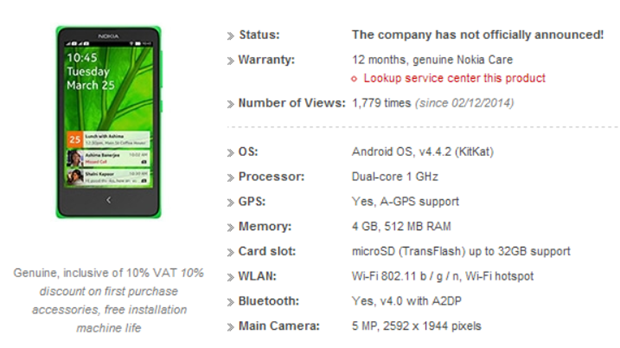 The Nokia Android phone known as the Nokia X or the codename ‘Normandy’ has been rumoured for a while, and according to WMPowerUser the phone was listed on their website – albeit briefly, because it’s now removed – for 2.2-2.5Million Vietnamese Dong or around AUD$114-$130.

The leak also lists much of the specs but as usual @evleaks has come through with a tiny bit more information about the device, specifically the arrangement that the Nokia X will use to get Apps:
https://twitter.com/evleaks/status/434364508262649856

A choice of six colours, $114-$130? I’m in, now to see if it has an unlockable bootloader and hope the phone gains traction in the ROM scene.

The phone is rumoured to be announced along with some Windows Phone Lumia products at the Nokia Press event scheduled on the 24th of February at Mobile World Congress in Barcelona Spain. Check your local times here and we’ll advise as soon as we know about any streaming details for the event :

Low specs. Low low specs.
You might think you want this, but you don’t.

Yep it’s got Low end specs but not unusable and it has a feature that the supposedly top end Nexus 5 doesn’t have (Memory Card slot anyone?) and it’s only around $100 …….. So let me double check …..I think I wanted it and ……. yep still want it!

It doesn’t come with the play store.

Seems strange that it wouldn’t be Google accredited…

Basically comes down to whether Nokia submits/submitted it for GMS certification.

Nokia is using the same ploy as Amazon, they weren’t interested in the Google apps, just leveraging Android for their own services. Such a shame too as even though this is Android, the Nokia store will be a ghetto compared to Google Play.