With so many running, cycling and various assorted fitness apps out there at the moment I thought I would take a look at one of the more popular cross fitness styled applications, Strava.

Immediately there’s a lot to like about the app, regardless of whether you’re on Android or iOS (clearly my testing has been done Android, not the latter). The fact that there is an app for both major platforms is a huge bonus, so you’re not caged into one or the other and you won’t lose your data should you see the light and head away from iOS to Android.

Like many other applications of it’s type, there’s a bit of a competitive feel to it when you follow your friends and you can compare your stats to theirs side by side. It doesn’t need to be that way though, you can give “kudos” to your friends for their efforts as they can to you, as well as commenting on rides/runs to help in keeping each other motivated.

You can track your progress, time on the go, distance covered as well as the equipment you’re using which is a really neat little addition to the data over a number of the competitors in the fitness tracking market that I’ve tried out. What for me is the genuine killer blow straight out of the box is the fact that the app isn’t crippled without paying the $6/month or $60/year for premium membership and I truly applaud them for this. You’re not subjected to adverts to cover this, you simply don’t get some of the more intriquite features such as effort/power tracking, heart rate analysis and goal setting. 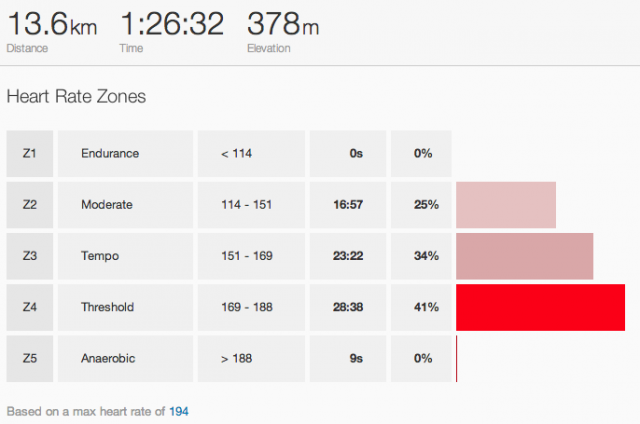 Should you venture down the path of purchasing a cycle computer such as a Garmin or a running GPS watch you can directly upload your GPS data along with heartrate to the application via their webpage www.strava.com where you can see your friends data as well as get recommendations on people to follow in your area or professional athletes who may be of interest to you.

The app also has a number of great features for privacy such as “privacy zone” where it won’t show a start/finish location to protect the location of your home to public viewers, you can (in a similar way to facebook or twitter) set your profile to private however this only prevents people from following you, it won’t prevent them from visiting your profile to see your data.

While there’s plenty of applications around for fitness tracking, out of all the apps I’ve tried Strava certainly has the edge over their competitors with features, functionality and a well thought out interface for both web and mobile use. I don’t mean for this article to sound like an advert but frankly, if you’re into cycling or running I can’t recommend at least giving Strava a try out enough. It’s an extremely good application for all levels of fitness from beginner to professional athlete.

Have you tried out Strava or one of their competitors? Let us know what the killer feature you’re looking for in a fitness application is

I’ve been using strava for a couple of years now, mainly for tracking my commutes. I’ve found myself getting very competitive with some of the segments on my ride which had brought down my commutes time a lot. My daily commute is 25ks each way and my average time is now about 45mins as opposed to the 55 when I started using strava.

There are two things that keeps me using Endomondo over Strava. Firstly, I’ve been using it for many years so it has a lot of history (not really a deal breaker, though). The second is the ability to set up private challenges, so a group of my friends can see how we are going against each other. I’m not aware of any other app or service that does the latter.

and the third being in-ear audible time checks.

Strava has the advantage of crowd sourced segments. Completely invaluable if you are a mountain biker. You can get the times and your ranking for each individual trail you ride over the course of a ride.

Very true. Although even as a mountain biker I personally don’t really care about my times over individual trails or against other local riders, which substantially reduces the appeal of Strava for me.

I mostly use it to compete with myself. There are certain trails around here where I really like to know my times on because I’m either highly ranked or in a cut-throat battle with my friends. Every second counts!

I’m the same, there’s some great fun segments near me in a rec park which if you just hang on for the ride you’ll rank ok, But if you attack it you’ll do quite well.

I live in Canberra, so I NEED to know my times on Mt Stromlo.

I mostly use it to compete with myself. There are certain trails around here where I really like to know my times on because I’m either highly ranked or in a cut-throat battle with my friends. Every second counts!