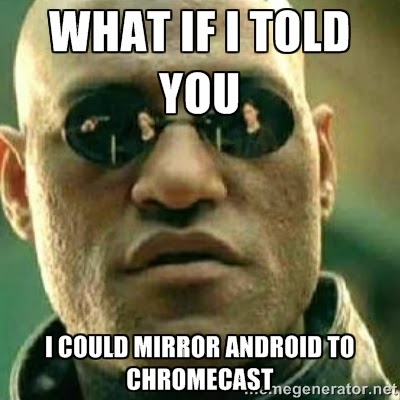 This is the image that popular developer Koush used to tease Chromecast and Android fans last week, about a feature that many have requested. Not only has Koush now got the ability to cast Android to Chromecast and released a video, he’s looked over the Play Services APK and believes that the ability could be coming to Android natively.

The video posted to YouTube via Google+ shows off everyone’s favourite viral hit game of the last couple of weeks – Flappy Bird – but also shows that there is a fair bit of lag involved with the reproduction between what’s on your mobile devices screen and what shows up on the Chromecast. It’s a problem that also plagues Miracast – but those adapters tend to be upwards of $60-70 for units. The video is worth a watch to see where Koush has gotten to using just the hacked together API’s he’s found in the GoogleCast SDK.

Speaking of pushing development of Chromecast, Koush also noted in a post that there are limitations to the current ways that Google Casts content from device to the screen and speculates that a new ‘magic’ protocol could be coming soon to speed up the transfer.

There’s work to be done on mirroring to TV from Android devices, at this stage MHL/SlimPort wired adapters offer the fastest option with Miracast and Chromecast seemingly lagging a fair bit, or at least too much to enable players to really get into gaming. But the ability to Chromcast your Android devices screen to a TV on a US$35 dongle is an attractive option for business and more static display.

Are you interested in casting your screen to Chromecast?